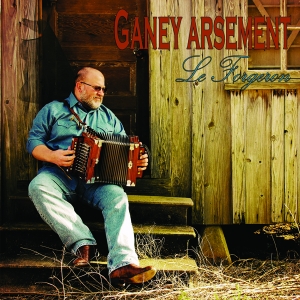 A twenty year veteran in the Cajun music industry, Ganey has shared the stage with some of the most revered names in the genre. A former member of the bands Balfa Toujours and the Basin Brothers, Ganey has performed with Jo-EL Sonnier, Doug Kershaw, Wayne Toups, Steve Riley and the Mamou Playboys, Sheryl Cormier, Jesse Lege’ and many others.

Le Forgeron is Ganey’s intentional giant step away from Cajun and into Americana. Influenced by the music of Sonnier and Kershaw in the eighties and nineties, as well as the music of Buddy and Julie Miller, the CD covers a broad spectrum of genres ranging from Cajun, Zydeco, Blues, Country and Texas Swing.

Nine of the songs on Le Forgeron are original tunes composed by Ganey. Six of the tunes are in English (one with English and French), and the remaining tunes are in Cajun French. The entire CD is a tribute to Ganey’s great-grandfather who was his greatest musical influence. The opening track is Ganey’s modernized version of his great-grandfather’s song which is featured as the final track.

The production of Le Forgeron was funded in part by the Louisiana Division of the Arts which recognized Ganey as a valuable asset to the musical community of Louisiana and awarded him with the “Artist Career Advancement” grant.

If you like the pulse of the accordion and the moaning of the fiddle in Cajun music, the gut-wrenching emotion derived from a screaming electric guitar, the foot-stomping motivation of a rocking rhythm section, or the twang of a tearful Country song, get ready to experience what we like to refer to as AmeriCajun!