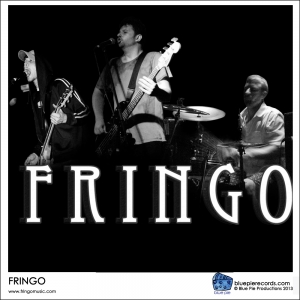 During 2003 in the Eastern Suburbs of Sydney, two brothers Mark "Snappa" Gellin (drums) & Paul Gellin (guitar/vocals) with their close mate Pete (bass guitar) formed the band Fringo. Within their parents garage in Little Bay, they built a small rehearsal studio. Equipped with a PA, an old Tascam 4-track recorder and a bar fridge, the three started jamming. It wouldn't take long before music with a new sound had been forged.

For 2 years Fringo hit the stages of Sydney’s live music scene impressing the audiences with their own style of hard rock and charismatic, high energy live shows. The unfortunate departure of Pete on Bass Guitar, led to the brother’s joining forces with their long-time mate and musician - Ashley.

This was the change that kicked the bands music into another gear. Fringo was now complete and with it, their sound took on a brand of it’s own. January 2005, and the band began work on their first recording. With the help of a friend and engineer, tracks were recorded between Q-Studio’s in Sydney and the bands own studio in Little Bay. Within a few months, Fringo’s first recording was complete. Titled One’s Nature, the album consisted of ten songs that brought to life every characteristic the band had become well known for.

M.Y.B, the first song off the album hits you with such a powerful riff driven by a groove that would easily compare to such great bands as Pantera. From the beginning, it wasn't hard to recognise that trademark Fringo sound. Without a doubt the track What You Want has always been a crowd favourite. Paul Gellin brings his harsh but melodic vocals to the forefront & pushes the song into a new space.

The Immortal Camel EP is the bands first official release since One’s Nature in 2007. The EP features a fresh new sound mixed with the Fringo style that has been polished over the years. Fringo have personally promised The Immortal Camel material will have you standing higher than “Joe Crocker loaded on Greek
Mountain Tea”.

Fringo’s music comes from a place where there are no boundaries, no rules or trends that need to be conformed to. It’s raw and it’s honest and that’s why it will stand out!

“We are a heavy-rock band, there is no doubting that, but it’s in our nature to experiment, & delving into styles like Funk & Blues is a part of our personalities & our music.”-
Fringo

“This is one very cool album (One’s Nature). The performance of the band on these songs is world class and delivery a freight train to your head of pure metal bliss. I am a fan and I am bias but here is what I know .... they rock and have a solid fan base and you would be hard pressed to pass on this album without having played this end to end at least twice. My opinion stands that this is one of the best metal releases for 2007. Rock on !!!”
5/5 Pies of Blue, iTunes.