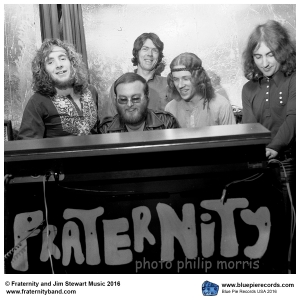 Fraternity are widely regarded as one of Australia’s greatest prog-rock bands. Formed in Sydney in 1970 and relocated to Adelaide in 1971. Former members include successive lead vocalists Bon Scott (who later joined AC/DC), John Swan (who also played drums and later had a solo career), and his brother Jimmy Barnes (Cold Chisel).

Fraternity released numberous singles culminating in their biggest local hit which was a cover version of "Seasons of Change" which peaked at No. 1 in Adelaide and No 19 Nationally. The band released 2 albums, Livestock and Flamin Gllah. The debut “Livestock” recieving strong local radio play and being critically aclaimed and an Australian rock masterpiece. Both albums are now major collector items in the vinyl worlds. The original pressings often selling for over $700 each if you can find them.

The group was a local favorite act and supported many of main touring acts that came to Australia from 1971 to 1973. In early 1971 the band won the Hoadley's Battle of the Sounds, landing the band an all-expenses paid trip to the UK. Sadly the band imploded not long after Bon left to join ACDC. Many of the surviing members are still friends to this day.

From that point on the band focussed on landing as many gigs as they could including touring with Status Quo in 1973. During this period the band came into contact and worked with a local Scottish band called “Geordie” that featured a young Brian Johnson on lead vocals.

This was to prove a cross road later for Brian Johnson having made friends with Bon Scott. Bon would go on from Fraternity to become the lead singer in ACDC. He would later say to the Youngs that "if anything ever happened to me call this guy ( Johnson ) to replace me, he is the only one that could".