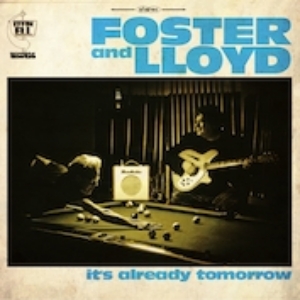 Looking back at the history of music, you can pinpoint those times when change takes place...something new replaces the old. Music that once sounded “like this” suddenly sounds “like that.” In the 1930’s, country music was considered to be the sound of hillbilly string bands. When the music was electrified, a honky-tonk shuffle played with a drummer became the new sound. It was still country.

In the mid-to late 1980s, there was another sea change—a short period of undeniable diversity coming out of Nashville that broke through on country radio. Steve Earle famously referred to it as “the great credibility scare,” a time of creative freedom that’s rarely been seen since. In the thick of that wide-open feeling, the duo of Foster & Lloyd came together and—along with Earle, Dwight Yoakam, Lyle Lovett, Rodney Crowell and others—was a part of the movement that changed the sound of country music and pioneered the Americana movement.

In 1985, Radney Foster and Bill Lloyd were two young singer-songwriters signed to the same song publisher. They came from different backgrounds but had enough in common to create an almost immediate response to the songs they co- wrote and recorded. Their first success came as songwriters (early songs were recorded by Sweethearts of the Rodeo and Ricky Van Shelton), but it was the distinctive sound of their publishing demos that gained them their record deal with RCA Records.
The duo mixed straight up Buckaroo country with jangly-Byrds sounds, looking and sounding a little louder than most of the other country acts of the era. Their first single, the rockabillyish-honky-tonkin’, “Crazy Over You,” shot to the top of the charts, making them the first duo in Country music history to score a No. 1 on their debut single.

Foster & Lloyd also became one of the first acts to be played simultaneously on Country and College radio, sharing common musical ground and press accolades with Rank and File, Lone Justice and the Blasters. The combination of their harmony vocals (recalling everyone from The Everly Brothers to Rockpile) with their self-produced guitar-centric sound and solid, clever song craft won over critics and fans alike.
In the end, they recorded three groundbreaking albums for RCA (containing hits “Sure Thing,” “What Do You Want From Me This Time,” “Texas in 1880” and “Fair Shake,” as well as “Crazy Over You”), toured internationally, garnered a Grammy nomination and were a constant presence at the CMA awards.

The duo split in 1990, with both members going on to successful solo careers. Though they remained friends and wrote together sporadically over the years, it took a request from the Americana Music Association to reunite for a fundraiser to get the duo together again onstage. News that Foster & Lloyd were performing for the first time in 20 years spread like wildfire, and the show sold out in 15 minutes. The band that night included Cheap Trick bassist Tom Petersson and drummer Keith Brogdon, with a guest appearance by bluegrass virtuoso and longtime friend, Sam Bush, on mandolin.

“It was so much fun getting back together onstage, and we realized that the new songs we had written together still had that magic,” says Foster. “We decided to start getting together once a month to write. Soon the songs were pouring out, and we knew we needed to get back in the studio.” Again, like it was in the beginning, they went in to the recording process to please themselves first–let the chips fall where they may.

The result is the new album: It’s Already Tomorrow. Fans of their older records will no doubt hear the familiar blend that only happens when Radney and Bill work together. One might think that after a twenty-year break, the vocal harmonies might creak a little but the duo sounds surprisingly strong from the opening notes. Foster’s voice is strong, deep and resonant throughout the album and you can hear the years of experience in his tone and timbre. Lloyd is still hitting all the high harmonies with style. Their blend is cohesive and is arguably tighter than it used to be.
As before, it’s the guitars that hold center spotlight when it comes to the instrumental aspect of the Foster & Lloyd sound. Lloyd delivers his usual guitar hooks sounding reckless enough to be exciting but melodic enough to be memorable. There are plenty of crunchy guitars to go with the twangy and succinct solos’ that you can hum later. Foster also adds both electric and rhythm acoustic parts to the mix.

The listener will also hear a deeper kind of songwriting that comes with age and time. Radney and Bill both recognize the creative spark between them and talk about it without reserve.
“When Radney and I get together, it’s hard to tell where one thing ends and one thing begins,” says Lloyd. “You may think the more country sounding stuff would be him, but sometimes it’s me. You’d think a certain guitar lick would be mine, but sometimes it’s his. There’s also a ‘third thing’ that happens when we work together that’s different from each of our solo writing and recordings.”

“Years back, we would be able to get inside each other’s heads pretty easily when we wrote—I think it kind of amazed both of us this time around how quickly we were able to get that back again.”

From the ringing opening notes of “It’s Already Tomorrow,” the rockin’ twin telecasters of “That’s What She Said,” to the plaintive harmonies of the final acoustic track “When I Finally Let You Go,” the collection is vintage Foster &
Lloyd. The duo co-wrote all twelve songs and co-produced the set, which was recorded and mixed by Justin Tocket (known for his work with Marc Broussard, the Randy Rogers band and others) with the same core band of Foster, Lloyd, Petersson and Brodgon.
Petersson even joined the duo in co-writing one of the songs. “Bill was out in Las Vegas, playing with Cheap Trick on their Sgt. Pepper’s orchestra production,” explains Foster. “I went out to write with Bill and see the show. We got together with Tom afterwards, and came up with “Lucky Number.”
The duo also dug up an old song, “Picasso’s Mandolin,” which they had written years before with Guy Clark, who recorded it on his Boats To Build album. “We felt like we wanted to put our spin on the song,” says Foster. “Bill found his original notes from that day, and we ended up writing another verse.” They called again on Sam Bush, who completed the track with an inspired mandolin solo.
Other guests include legendary pedal steel guitarist Lloyd Green, who is featured on “You Can’t Make Love Make Sense” and the Beatle-esque ballad “If It Hadn’t Been For You.” Noted producer and former Emmylou Harris steel guitarist Steve Fishell also played blistering lap steel on “Don’t Throw It Away,” and singer/songwriter Beth Nielsen Chapman came by to lend her beautiful voice to “Lucky Number.” After the core combo tracked the album, Radney and Bill recorded one last song, the acoustic-based "When I Finally Let You Go," in Radney's home studio. Bruce Springsteen's E. St. Band bassist, Garry Tallent, was in town visiting and added a nylon string bass part to the recording.
Through all the inventive lyrical twists and turns and crackerjack guitar licks, what comes through loudest is a sense of fun, adventure...and freedom. “Back then, we were concerned with trying to keep ourselves within a radio format,” says Lloyd. “We would try and be different enough to stand out but we didn’t want to color too far outsides the lines (although some would say we colored right off the page from the git-go). We didn’t have any constraints this time. The sound of this new album is unfettered by formats...either real or imagined.”
Country. Rock n’ Roll. Power-pop. Folk. Americana. Whatever you want to call it, Radney and Bill combined make Foster & Lloyd music.
51
What's This
Advertisement