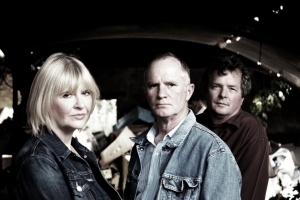 Gary Ferguson from Pennsylvania, USA is an award winning Singer, Songwriter and Musician. He has had two #2 songs on the “Bluegrass Unlimited Top 30" and three of his songs were in BU’s Top 200 Songs of the 1990's. His song “Last Day at Gettysburg” was not only a big hit for Larry Sparks, but has also become somewhat of a 'Bluegrass Classic' and can often be heard around campfires at Bluegrass festivals.

Born and raised in Belfast, and coming from a musical family, Janet Holmes first performed aged 14 and has remained fearless onstage ever since. Having been part of a number of successful bands in the past she has for the last few years been combining solo performances with fronting her own troupe of varied musicians. Janet has released her second album with ‘Wonder Why’ and has stepped up front writing 9 of the 13 tracks herself with songs that combine strong melodies with thoughtful lyrics.

Hailing from North Antrim, Northern Ireland,Colin Henry was brought up on the late night music sessions in his family hotel. Not the familiar Trad or Bluegrass sessions, however, but around the piano playing and singing Swing, Jazz, Show Tunes and the occasional Irish Ballad. His first performance at the age of 15 was playing ‘ Down by the Riverside’ on Tenor Banjo at a Saturday night dinner dance in the hotel. He has been playing and performing ever since.