Fanny Mae and The Dynamite Believers- Live Love Give Lo 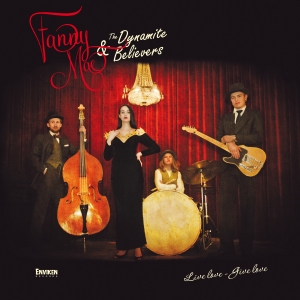 Fanny Mae & The Dynamite Believers – Live Love, Give Love (2013):
”Rockabilly music’s answer to Edith Piaf”
That was the swedish newspaper ” Arbetarbladet” headline after a concert at Maxim in Gävle September 2012.

“Fanny Mae & The Dynamite Believers” wish for nothing less than to share their love & magic with the rest of the world and off course their music.

After reaching succes with the band Monastir hard times struck the singer Fanny Wedmark.
First with the tragic loss of her brother whom was very close to her & then cancer was discovered in her body wich resulted in (at least according to the doctor’s) that she could never get pregnant.
During this very dark period she meet two of the members, Isak & Pontus. These two became a big support for her, they gave each other strength & they somehow knew she would get well again, wich she did.

One day they met Olle, the drummer. It turned out that he was one of them, they teamed up for a rehearsal but they mostly drank coffe & talked that day as they had so much in common, still he joined them for a gig that same weekend, it just felt natural to them. The word spred fast, their authenticity, magic & joy was immediately embraced, one gig led to another & things has just rolled on from there.

Now they’re ready to share their music with the rest of the world & their first album is soon to be released. To describe the bands music is not that simple, they’ve incorporated all their influences such as: Swing, Blues, Rockabilly, Burlesque, Gypsy, Rock, Jazz & yes, Edith is in there somewhere also.