Ernest Tubb The Legend And The Legacy 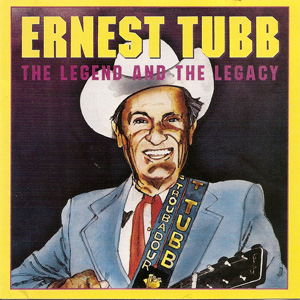 Contact info@creativeanddreams.com for more information about Ernest Tubb- The Legend and the Legacy.

Thank God for giving us Ernest Tubb, who had the foresight to make Country Music what it is today for all of us.
-Pete Drake

Ernest Tubb should be declared a national monument. That grand, old man is a walking repository of all that’s good about country music. And he still takes it on the road 300 days a year, at the age of 65. He is even more to be admired for personally preserving country music’s integrity, in an era when some country singers are fleeing to Hollywood and the places where the big bucks are. Tubb refuses to compromise in his music. No slick Hollywood productions for Mr. Tubb. He still plays and sings straight from the heart - real country music, the sagas and the vignettes of real life.

His contributions to country music, and in fact to all American music, are immeasurable. He was the first to fight the record companies when they tried to call country music “Hillbilly Music” and he rightly said that it should just be called “Americana” or “American Music”, for that’s what it is.

Earnest Tubb was born February 9, 1914, on a farm near Crisp, Texas, prime ranchland in Ellis County south of Dallas. The land was rich but the people were poor. During the Depression, Tubb’s family moved to San Antonio, where Ernest landed a job as a soda jerk. He had already started singing and playing guitar, inspired by the great Jimmy Rodgers.

Despite the Depression, Tubb was determined to become a professional singer. He knocked on the doors of all the radio stations and eventually persuaded station KONO to let him on the air for two fifteen-minute shows twice a week at 5:30 in the morning. It wasn’t the Grand Ole Opry, but it was a foot in the door. Although he never got to meet his hero, Jimmie Rodgers, who had lived in nearby Kerville, Ernest patterned his style after the Blue Yodeler. In 1935, he met Rodgers’ widow, Carrie, who gave him one of Rodgers’ guitars and helped him get on a concert tour, and eventually get a recording contract with RCA Victor. He recorded “Jimmie Rodgers’ Last Thoughts” and “The Passing of Jimmie Rodgers” at San Antonio’s Texas Hotel. Trying to copy Jimmie Rodgers was the only musical mistake Ernest Tubb ever made. In the late thirties, he began to discover his own style, a deceptively-lazy sounding brand of honky tonk music.

He became the master of it. Even Bing Crosby recorded a version of Tubb’s “Walkin’ The Floor Over You.” There is not a true-blue Texan anywhere who won’t stand and cheer when Ernest sings “Waltz Across Texas”.

Ernest Tubb is honky-tonk music personified. If I could be a country singer, I’d want to be Ernest Tubb. Since I can’t be, I’ll listen to his records. I don’t know about you, but the first place I visit every time I come to Nashville is not the Grand Old Opry. It’s the Ernest Tubb Record Shop.

For more Ernest Tubb on AirPlay Direct please check out: