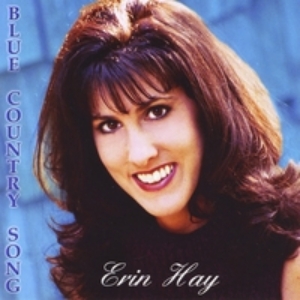 Erin was born and raised in Southern California. Born to Edward (who sadly passed away from Cancer when Erin was only six years old) and Patricia Hay on November 25, 1970, she has always been a performer and has always loved music. In fact, if you listen to her mom, she'll tell you Erin "sang" her first song at 3 months old. She was exposed to all kinds of music growing up, from her mother's Frank Sinatra, Rosemary Clooney and Judy Garland albums to her two older brothers (Joe and Ken) playing Rock and Roll to her Dad's favorite, Marty Robbins. But at age seven, when Erin heard Dolly Parton sing for the first time, her love and admiration for traditional Country Music began to grow. She discovered Loretta Lynn after the film Coal Miner's Daughter came out and soon after discovered Tammy Wynette. These great ladies, along with the likes of George Jones, Jack Greene and Roy Acuff, became her influences, and it was through them that Erin was introduced to stories of Nashville and the Grand Ole Opry. She quickly took to the music and to the tradition. This is what she loves to sing.

Although singing was a great love of hers, it seemed acting was more of a calling throughout school. In 1987, Erin entered the Fountain Valley Jr. Miss Pageant and won the Performing Arts Award for performing a comedic monologue from Lily Tomlin's one woman show, "The Search for Signs of Intelligent Life in the Universe." Erin had plans of attending UCLA as a Theatre Arts major. She had aspirations of following in the footsteps of her two other idols, Lucille Ball and Carol Burnett. This, of course, never happened. While attending college in California, Erin realized she did not take the acting craft as seriously as everyone else did. What she did take seriously was her music. Erin knew in her heart that Nashville was where she wanted to be. The real turning point came after a visit backstage at the Grand Ole Opry and a meeting with Mr. Roy Acuff. That was the environment she longed for. She wanted to sing on that stage and knew she had some dues to pay.

Erin moved to Nashville in 1991 with her mother to attend Belmont University as a Music Business major. Since the move, she has interned at RCA Records and Sony Music, recorded many demos for Nashville songwriters and performed at many Nashville clubs. Erin recorded her first independent album in 1992 with the help of producer and songwriter, Lonnie Ratliff. It was a cassette tape compiled mostly of demo recordings and included a song called "Somebody's Angel," which she later re-recorded. Erin graduated from Belmont in 1995 and was hired by a film production company in Nashville, working with such artists as Garth Brooks, Faith Hill and Janet Jackson in the behind the scenes aspects of live concert TV production and music videos, eventually venturing into the freelance film production world. But Erin's first love was still her music. She completed her second independent album, Honky Tonk Heaven, in October of 2000. It received great reviews around the world and was a #6 import CD in the UK in April of 2000. Erin released her third independent album, The Circle, in 2001-fourteen cuts of the music she loves, music she hopes would have made Mr. Acuff proud. She is proud to have two duets on that album with Grand Ole Opry stars Ernie Ashworth ("Gotta Travel On") and Jack Greene (Tommy Collins' song, "High On A Hilltop.") Erin is also very proud of the liner note her idol, Loretta Lynn, graced her with for the project:
"Erin is a great singer. Maybe the Opry will find that out someday. I love her singing."

Dolly Parton also graced Erin with a treasured quote about the Parton-penned song she recorded on The Circle, "Tomorrow Is Forever:"

"I am so proud of the record Erin did on "Tomorrow Is Forever." I think she did a beautiful job. It’s always been one of my favorite songs; and it touched me that it was someone else’s favorite as well. It’s old, but so am I! Hopefully, songs live forever. It’s always nice to have new, young artists record them."


The Circle album became a #3 import CD in the UK in February 2002. In August of 2004, she got hired on at a business management company in Nashville, working with such clients as Blake Shelton and Craig Morgan. In 2005, she released her 4th album titled Somebody's Angel, which was also very well received. One of the singles off the album, a song written by Bill Jackson called "The Tree," gave Erin her biggest overseas chart success to date. Erin released her 5th album in 2006, a collection of songs from her 3 previous albums and 5 cuts from an upcoming project titled Blue Country Song, due out the end of 2007.

Erin also enjoyed a lot of success on mp3.com, a website that was devoted to independent artists. She has obtained a wide following in the European/overseas market (largely due to the mp3.com exposure,) being dubbed the "New Queen of the Honky Tonk Angels." Erin's song, "I Got the Blues Again," is one of the most downloaded Country songs to date on mp3.com, and it was featured in the Robert Altman/Alan Rudolph film, Trixie, in 2000. She is very grateful to the people of mp3.com and to the overseas and US disc jockeys playing her music. Erin has traveled to Denmark, Australia and Sweden to perform and is looking forward to many more performances both overseas and in the US. She is definitely having fun on her road to the Grand Ole Opry, and if Erin is destined to sing on that great stage someday, it will be the pinnacle in her singing career, not just a stepping stone.

"When it's too Country for everyone else, it's JUST RIGHT for me!" - Erin Hay
Label Copy