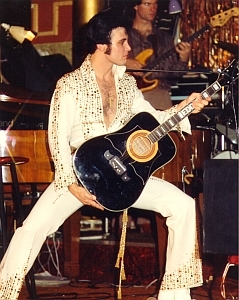 Eddie Youngblood was born in the Victorian bush town of Apollo Bay. After moving around Victoria for several years due to his father's occupation, the family moved to Townsville, Qld, the complete extremity in climates, but this didn't change the country boy.
During his teen years, Eddie got his first taste of showbiz by entering a High School talent show. He didn't win the judges' award but won the audience prize of $10.00 by an overwhelming vote. This small success, combined with playing in local bands, gave Eddie the urge to further his career in the big smoke - Sydney.
After serving his apprenticeship in talent quests, Eddie formed a show around the music of his idol Elvis Presley.
Today, Eddie is Australia’s multi award winning Elvis tribute artist - and with good reason! From the Golden to the Vegas years, he executes a dynamic performance so full of energy, he leaves no choice for the audience but to sweat! He has style, charm, good looks and presents his shows in a tasteful, very professional manner.
The recipient of two “MO” awards, which is the highest entertainment award in Australia & the Daily Telegraph Readers' "Favourite Entertainer" award, Eddie has appeared in three major TV variety shows, has three top selling albums, and holds nominations for awards for his live theatre role of “Pharoah” in the stage production of “Joseph & His Amazing Technicolour Dreamcoat”.
He believes in what he does, believes in the legacy Elvis left us, and that Elvis’ music should be presented in the most respectful, honest way possible.
THIS IS EDDIE YOUNGBLOOD!
11
What's This
Advertisement