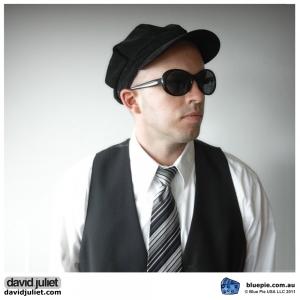 David Juliet’s music blends a vast array of sounds including pop, funk, and alternative genres. Compared to iconic artists as varied as Lou Reed and Leonard Cohen, Juliet shows an approach to songwriting and performance that is as unique as it is timeless. His debut album "Variations" (Concerthouse Music / Blue Pie Records) has been receiving much critical acclaim, and includes the single of his latest music video “Out of My Head.”

Juliet has already been nominated for a number of awards, including a New Artist of the Year award in New Music Weekly Magazine and Best Male Mainstream Artist by the Independent Music Network. His music combines a vast array of different musical genres into an unmistakable brand of pop that is sure to mesmerize and inspire music fans from all over


It’s been a great start to the year for David Juliet. The video for his new single “Out of My Head,” is now appearing on video stations across the United States and around the world.

The video is the first released by David in support of his acclaimed debut CD Variations. It features David playing in a dimly lit bar for a beautiful, young woman.

"‘Out of My Head’ was that song from the record that constantly received that ‘I love that song’ reaction from my fans, so it was the obvious choice for the first video,” says Juliet. “I wanted to keep the premise simple,” he says. “It’s really a love song at heart, so I felt the video should focus on the relationship between two people. A beautiful women walks into a bar, and I play only for her. I like that idea – there’s a real sense of romance there. And the woman leaves with me. Really, what could she do – being serenaded by a full band with the singer singing a song only for her?”

David is planning to begin his 2013 tour this summer, starting with his stomping grounds of Toronto and New York City, and continuing across the United States and into Europe. “We’re still putting the tour together, booking venues, making decisions. We’re planning to get things rolling in June or July,” says David. “First stop will likely be New York, then we’ll see where the wind takes us.”

David Juliet is a Blue Pie artist and is out now on Blue Pie for the world. For more information go to www.davidjuliet.com or search “David Juliet” on Google.