Waiting For The World To End 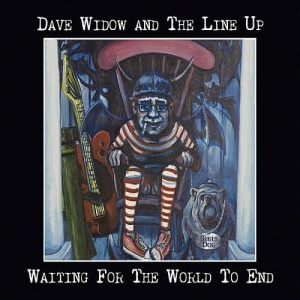 With the cream of the crop behind him on stage and in spirit Widow enjoys access to regular performances at signature L.A. venues like The House Of Blues and its Foundation Room, The Mint, The Langham, B. B. King's Blues Club and others.

With his distinctive style of finger picking and soulful vocals, Widow brings a fresh approach to the Blues by combining elements of R&B, Funk, Soul and Rock. His musical style is influenced by his close relationships with great blues and R&B talents including Buddy Miles, Bonnie Bramlett, Bill Champlin, Lonnie Mack, and his mentor and collaborator (the late) Roger "Jellyroll" Troy, bassist and vocalist for The Mike Bloomfield Band.

Widow explains his take on blues. “I like the way there is room for a lot of lateral movement within the context of playing it, and all of the latitude within, to explore, and the impromptu ways you can interpret it.” He continues “If you asked me three words to describe my music , Id’ say funky, soulful and backbeat.”

‘The Line Up’ consists of L.A.’s most noteworthy and well-recorded musicians. Music Connection wrote "Their masterful musicianship and deep understanding of the blues is a major draw, but the humble nature of each outrageously skilled player is what gives this group's music its genuine soul.”

Switching off on drums are Gary Mallaber; Drums on Fly Like An Eagle, Moondance, Two Tickets To Paradise, and James Gadson; former drummer for Marvin Gaye, Paul McCartney, B.B. King, etc. ‘The Line Up’ boasts two bassists: Gerald Johnson; bassist for Steve Miller, CS&N and Dave Mason and Reggie McBride who plays with B. B. King, Elton John, and Keb' Mo'. David Morgan, who rounds out the band on piano and vocals played with Ricky Nelson and the Stone Canyon Band and The Nelsons.

Dave Widow & The Line Up’s new CD "Waiting For The World To End" is a collaborative effort. Four tracks are Dave Widow compositions. ‘Second Hand Love’ is co-written with Bill Champlin of The Sons of Champlin and formerly Chicago. Six tracks are penned with the aforementioned David Morgan (Delaney Bramlett, Jerry Lee Lewis, Leonard Cohen, Dolly Parton, Kenny Rogers, etc.) and whose song ‘Now I Don’t Believe That Anymore’ was recorded by Ray Charles. Widow co-wrote a total of eight tracks with a mix of The Line Up members Morgan, Mallaber and McBride.

Where most artists would jump at Huey Lewis’ offer to play on their CD, Dave nonchalantly chalks it up to just another item on the pre-production to-do list that he never got around to. Unpretentious indeed.

True to form, Dave’s CD features the incomparable Mike Finnigan on Hammond B-3 and piano, a special appearance by Bill Champlin and Barry Goldberg whose songs have been recorded by Rod Stewart, Bobby ‘Blue’ Bland, Gladys Knight, Joe Cocker, etc. and whose own album was produced by Jerry Wexler and Bob Dylan.

To attract and assemble such a collective pedigree takes more than cash and a pretty please. The reason Dave Widow attract elite talent is crystal clear upon first listen to Waiting For The World To End.