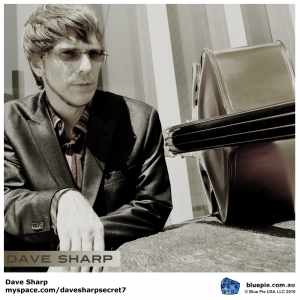 Bassist Dave Sharp’s warm tone and driving rhythms have made him one of the most exciting jazz talents on the Detroit scene today.

Dave Sharp was born and raised in Detroit, Michigan where he was exposed to and inspired by the city’s rich music heritage. While earning a degree from the University of Michigan, Sharp became deeply devoted to the study of jazz and the perfection of his art. This devotion culminated in a move to San Francisco where Dave studied jazz and music theory with legendary bassist Herbie Lewis (McCoy Tyner, Cannonball Adderly, Les McCann) at the New College of California.

While living in San Francisco, Sharp served as bassist and composer for the modern jazz ensemble the SphInfluence, the Killer Joe Trio and the Jeff Griffin Quartet. After touring the West Coast and playing a run of shows with Jeff Griffin in Tokyo, Sharp returned to the metropolitan Detroit area in 1998 and he continues to compose, record, teach and perform live in front of appreciative audiences.

Dave Sharp’s Secret Seven is “World Jazz for the Jazz World”. It transcends musical, national, and ethnic boundaries by re-interpreting, not fusing, influences from Africa, Asia, the Latin world, Blue Note Jazz, and that other planet, New Orleans.

The band features Dave Sharp (The Melvins) on electric & upright bass, Chris Kaercher (Aretha Franklin, The Four Tops, The Temptations, and the O’Jays) on tenor saxophone and Eric “CHUCHO” Wilhelm on drums & percussion.

Sharp and his Secret Seven group create music that makes you feel good and are highly capable of exploring more nuanced and reflective places, yet always making sure to take the listener along wherever they are going.

Dave Sharps ‘Secret Seven’ Album, released in August 2010, features Dave Sharp on electric and upright Bass, leading a steady groove and laying the foundation for the bands irresistible melodies. The album has been critically acclaimed globally and continues to develop more and more fans.

Blue Pie has licensed Dave Sharps track “The Seventh Secret” into the 2011 Australian independent film “The Argues: The Movie” Check out www.thearguesthemovie.com.au and released his latest album “Worlds” on the 9th of January 2012.