Dave Koz - The 25th of December 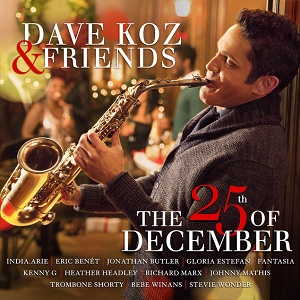 The holidays have always been about bringing close friends together and celebrating the season with good times and great music. Saxophonist Dave Koz has been doing it every year for nearly two decades with talented friends and collaborators on a tour that brings the yuletide spirit to devoted audiences from one coast to the other.

“Christmas songs already have, inherently, in their DNA, all the things you want in a piece of music,” says Koz. “Why do we want to hear these same songs year after year? Because they’re more than just lyrics or notes on a page. They’re touchstones. They are musical doorways that enable us to go back and visit times in our lives that were much simpler and much more innocent.”

The challenge for Koz and his guests was how to mix it up on The 25th of December and provide something for everyone. “We wanted to have a good chunk of traditional Christmas songs that everybody knows,” he says, “and then a handful of newer Christmas songs that maybe not everybody knows, but have become popular in the last few years. And then it was important to me as an artist to say, ‘Here are a couple songs that you’ve never heard before that we’re going to throw into the mix.’”

The result is a diverse and satisfying holiday set, beginning with the very first notes of a fully orchestrated instrumental rendition of “The First Noel,” a song that Koz had never recorded for any previous holiday album, but one that he considers a personal favorite. “In my mind, it was a way to get the party started with something that everybody knows. It’s a beautiful arrangement by Lenny Wee.”

The follow-up track features the legendary Johnny Mathis in an upbeat interpretation of “It’s the Most Wonderful Time of the Year,” one of his signature holiday tunes. “Johnny’s original version of the song is iconic,” says Koz. “So I was a little concerned about going to him and saying, ‘Would you mind recreating a song that you’ve already made famous the world over?’ And he said, ‘I’d love to.’ Being in the studio with him that day was one of the greatest days of my career. It all came together organically. We did it with Billy Childs on piano, Chuck Berghofer on bass and Clayton Cameron on drums. I played, Johnny sang, and there it was.”

Things take a slow, sultry turn with “This Christmas,” the R&B holiday classic delivered here by vocalist Eric Benét. “I’ve known Eric for more than 20 years. He’s one of my favorite singers. We had this idea of taking this great Christmas song by Donny Hathaway and really taking the tempo down to make it a slow jam. I knew when Eric was in the studio that he would want to make it a sexy Christmas song. The groove is deep, and I put a little alto saxophone in there. It’s pretty romantic. You know exactly what’s on the singer’s mind when Eric delivers this song.”

Gloria Estefan steps in for a rhythmic reading of “Do you Hear What I Hear?” “Rickey Minor, our producer, said, “Why don’t we give it this beat with a lot of drums?’” recalls Koz. “I think he was tapping into what we all know Gloria does best. We got her the arrangement, she loved it, and she turned in a fabulous vocal.”

“My Grown Up Christmas List” is especially meaningful for Tony Award-winning vocalist Heather Headley, who recorded the track when she was eight months pregnant. “This is one of the songs that’s not as well known as some of the more traditional Christmas songs on the album,” says Koz. “It was written several years ago by David Foster and Linda Thompson. I’d never cut it, but I loved the message of it. We sent it to Heather, and she said, ‘I’m on this. And by the way, I’m pregnant, so this is something I can really relate to. This song is about my wishes for the world that my baby will grow up in.’”

The poignant “Another Silent Night,” featuring Richard Marx (who also co-wrote the song with Koz and Trey Bruce and arranged the track), is one of two new songs written for this album. “Richard has that pure, crystal-clear voice,” says Koz. “I can really relate to that song, because it’s about a guy who’s not at home with his family during the holidays, but he really wants to be there.”

The fully orchestrated “Let It Snow! Let It Snow! Let It Snow!” is a sax summit that features Kenny G, no stranger to successful holiday recordings. “Kenny is a good friend, and we’ve known each other for many years, but we’d never recorded together,” says Koz. “So this track is something of a musical moment – a coming together of two people who have played the saxophone for a very long time. This was an opportunity for each of our musical identities to be well represented – soprano sax for him, tenor sax for me – and yet we could meet in the middle and play off each other. Kenny was very open to the concept of doing a big band arrangement with a killer rhythm section and it was really fun.”

The title track, written and sung by BeBe Winans, is the second of two songs written especially for this album. “I think this is an absolutely gorgeous piece of music,” he says. “The first time I heard the demo – just BeBe and piano – I thought, ‘Oh my God, I know this song!’ It sounded like a classic that we already knew. BeBe is a very devout man, and that comes across in the song.”

India.Arie sets up an old-school groove on “I’ve Got My Love to Keep Me Warm,” sung in the spirit of Ella Fitzgerald, who had a hit with the same song decades ago. “This is a classic, but it hasn’t been recorded all that often,” says Koz. “India was really excited about doing an Ella Fitzgerald song. We put this very retro track together, and I think she turned in one of her greatest vocal performances ever.”

Part of the song’s success stems from the groove set up by Koz on tenor sax in tandem with Troy Andrews, the New Orleans native better known as Trombone Shorty. “Ricky and I were thinking it would be great if we did this song this way, with trombone and tenor,” says Koz. “So I texted Troy to see if he’d be willing to do it. The next day, he texted me back and said, ‘Yeah, I’ll do it. Send me the track and the chart and I’ll play it, and do a solo.’ The next day after that, I got it back and there it was. I played to what he did, and then India sang to that. I think she was inspired by the sound, and I love her performance on it.”

The stirring “O Holy Night” is a nod to the annual Dave Koz & Friends Christmas tour. The track features Jonathan Butler, a regular fixture on tour who consistently brings the house to its feet with his delivery of this song. “There’s such a poignancy when this man delivers this very pure, very transparent song,” says Koz. “But up until now, that arrangement had never been recorded. So I went to Jonathan and said, ‘I really want you to be on this album. I think it’s very important that we do this song, and I think it’s extra important that you do the exact arrangement that we do in our show.’ He came into the studio with his guitar, the band was all there, we cut it live and what you hear on the album is his first take. This man owns this song.”

Fantasia steps up for a high-energy, gospel-style medley that includes “O Come All Ye Faithful”, “Angels We Have Heard on High” and “Hark! The Herald Angels Sing.” “We wanted to do something that was just go-get-em,” says Koz. “Jason White, who is one of the keyboard players on this record but also a great arranger, is the music director of the West Angeles Church, one of the most popular gospel churches in Los Angeles. Fantasia just catapults it to another place through sheer energy and emotion.”

Everyone returns for the final track, a rousing version of the Beatles’ “All You Need Is Love,” a song with a message especially resonant during the holidays. Leading the charge is Stevie Wonder, who brings his trademark spontaneity and positive energy to the track. “With Stevie, you never know what’s going to happen,” says Koz. “He plays harmonica, and then he ends up singing the whole back half of the song. There are very few people in life who can take the message of this song and deliver on it, and he’s one of them.

Many of the songs on The 25th of December will be a part of 2014 edition of the Dave Koz & Friends Christmas tour, which will be announced shortly. Much like the holiday tour – and the season itself – the album is a communal experience, a moment in time when we reconnect with those people in our lives whom we care about most.

"I wanted this album to be like the best holiday party, to make listeners feel like they had been invited to my house, along with all these phenomenally talented artists," Koz says. "I pictured us all retiring to the living room after dinner, where there's a big grand piano, and everybody got up and did a song, and I played a little bit of saxophone with them. With this album, I wanted to reaffirm the ties that bind us all."
15
What's This
Advertisement