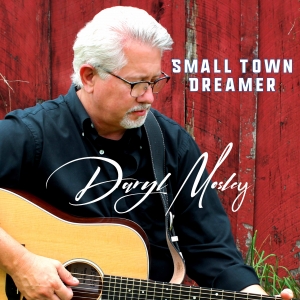 Over the years, hitmaker Daryl Mosley has evolved into one of the most critically-acclaimed artists in Bluegrass and American Roots genres. In addition to receiving two Songwriter of the Year awards, performing on the Grand Ole Opry numerous times, and penning six different #1 hits, Daryl debuted as a solo artist with his 2020 album, THE SECRET OF LIFE (Pinecastle Records). The Waverly, Tennessee native is excited for the release of his sophomore solo album SMALL TOWN DREAMER - available November 5.

The collection includes 12 new tracks, all spotlighting the Waverly, Tennessee native’s small town roots and humble upbringing. The record was co-produced by Mosley and The Grascals’ Danny Roberts. Mosley penned all 12 of the album’s tracks, co-writing three songs with Lang and one with Roberts. The first taste of Small Town Dreamer came via the lead single “Transistor Radio.” The current single is the track "Bringing Simple Back." The theme from start to finish centers around Daryl’s one-of-a-kind storytelling and his chameleon-like ability to segue gently through multiple genres.

ABOUT Daryl Mosley:
For more than three decades, award-winning singer-songwriter Daryl Mosley has applied his warm-as-country-sunshine voice and thoughtful lyrics to a wealth of memorable material. Throughout the '90s, he toured as lead vocalist/bass player with much-celebrated Bluegrass group The New Tradition, then joined the legendary Osborne Brothers in 2001. In 2010, Mosley formed The Farm Hands, which quickly became one of the most awarded bands in Bluegrass. In 2020, Daryl stepped into the solo spotlight with THE SECRET OF LIFE. The album spent multiple weeks at #1 on the Roots Music Report Contemporary Album Chart, and the lead single (“A Few Years Ago”) spent a total of six weeks in the top spot on the Contemporary Song Chart. Mosley has written six #1 songs, been honored as Songwriter of the Year twice and earned three Song of the Year awards (SPBGMA). Lynn Anderson, Bobby Osborne, Josh Williams, the Booth Brothers and Carolina Blue are among the many artists who have recorded Mosley's songs. He resides in Waverly, Tennessee.
64
What's This
Advertisement