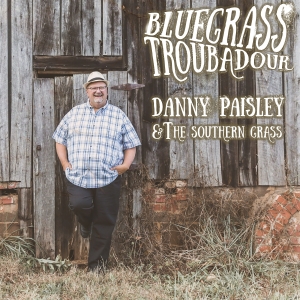 Reigning IBMA “Male Vocalist of the Year” Danny Paisley released his critically-acclaimed album Bluegrass Troubadour in 2021. Joined by his band The Southern Grass, the project wrote the next chapter in the group’s storied career. The collection includes ten recordings, which all stay true to the group’s traditional, yet original sound. The release marked the very first release from Danny Paisley & The Southern Grass on Pinecastle Records as well.

The impressive track listing featured a variety of songwriters, with recordings hitting the highest of highs and the lowest of lows (see full track listing below). It was produced by Wes Easter, Danny Paisley, Ryan Paisley and Bobby Lundy, while featuring additional instrumental appearances from Mark Delaney and Matt Hooper. Music enthusiasts were treated to the lead single from Bluegrass Troubadour in early 2021. Titled “Blink of an Eye,” the song was penned by Robert Amos and perfectly captured the one-of-a-kind sound of Paisley’s voice. To date, the anthem has already turned countless heads, with Bluegrass Today calling it “a driving mid-tempo number packed full with the soulful stylings that have made Paisley a favorite in bluegrass music for so many years.” The track hit No. 1 on the Bluegrass Unlimited charts and was also a finalist for "Song of the Year" at the 2022 IBMA Awards.

Another standout on the record is “Date With an Angel.” Written by hit songwriter Brink Brinkman, the track showcases a softer side of the award-winning group. The Bluegrass Situation gave fans an exclusive first listen of the song, when they debuted it in-full last month. BGS also recently named Paisley as “the current reigning prince of Baltimore-D.C.-area bluegrass” calling the area “a scene with rich history dating back to the 1950s.” Joining the album is Lizzy Long, who is featured on the cut “I’d Rather Live by the Side of the Road,” which offers an optimistic approach to making the world a better place.

Throughout the lead-up to the launch of Bluegrass Troubadour, Danny Paisley offered some of his best tips in a recent feature with Authority Magazine, which was also published on Medium. The publication proclaims, “From start to finish, the new collection is rooted in tradition, but with an approach that looks optimistically into the future” while saying “It also features Danny’s son Ryan, showcasing the next era of the award-winning band!” Check out the full in-depth interview, which also highlights Danny’s ‘Five Things You Need To Shine In The Music Industry.’

To keep up with all things Danny Paisley & The Southern Grass, check out the band’s official website to get the latest news stories, find out upcoming tour announcements and more.