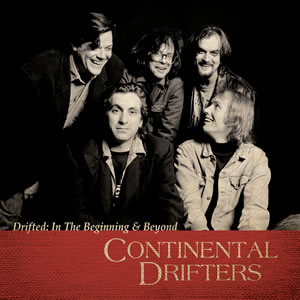 Born in Los Angeles in the early 1990s via a residency of week after week jam sessions at a dive club called Raji’s—then relocating to New Orleans—the band’s trajectory lasted about a decade and ended when Hurricane Katrina demolished their homes and the band
members scattered.

Key members included Vicki Peterson (Bangles), Susan Cowsill (The Cowsills), Peter Holsapple (The dBs, R.E.M.), and many more—including the only member who has been with them from the beginning, Mark Walton (Giant Sand, The Dream Syndicate). However, there were also several singer/songwriters (Carlo Nuccio, Gary Eaton, Ray Ganucheau) without an
impressive pedigree that shine as brightly as their slightly more famous bandmates. That’s the magic that we’ve captured on Disc One of this set with the band’s earliest recordings— many previously unissued, others that only appeared briefly on a German
only compilation.

The best possible comparison that we can make is that the Continental Drifters had a similar vibe to the classic roots combo Delaney & Bonnie & Friends—more of a “collective’ than a band—in which there were several distinctly original lead singers, blistering
sidemen instrumentalists and an inspiring blend of both original and seminal cover songs with a southern fried blue-eyed soul approach that couldn’t be beat.

Disc Two is an incredible treat for not only the band’s handful of hardcore fans, but for fans of classic roots music in general; from live sets, tribute albums (Gram Parsons, The Hollies) and the rare 2001 European only EP Listen Listen, their valentine to Fairport Convention’s Sandy Denny and Richard Thompson, as well as other unheard treasures.

Drifted: In The Beginning & Beyond (re)-introduces the Continental Drifters, explores their influence and magnitude, and fills in the gaps of their expansive career. It is a trip well worth taking.
14
What's This
Advertisement