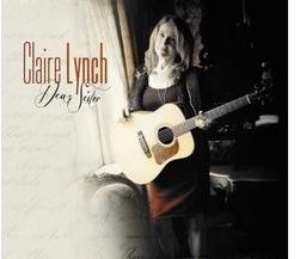 Calling someone a “singer’s singer” is often an overused and under-deserved cliche. In Claire Lynch’s case, it’s an understatement. For proof, look no further than her much-anticipated Compass Records debut, Dear Sister, arriving May 28. She may not yet be a household name outside the worlds of bluegrass and Americana, but she’s well known in the households of many of the premier singers of our time. Individually, the women of the legendary Trio - Emmylou Harris, Dolly Parton and Linda Ronstadt - have all called upon Claire to add her crystalline harmonies to their solo projects, as has master singer-songwriter Jesse Winchester. When Patty Loveless recorded her first No. 1, “If My Heart Had Windows,” her harmony singers were Claire and a guy named Vince Gill. A gifted songwriter as well, her songs have been recorded by Patty Loveless, The Seldom Scene, Kathy Mattea, Cherryholmes and many others.

But it’s as a bluegrass bandleader that she’s best known and her current lineup is her strongest yet, featuring like-minded musicians blending tradition and innovation - two-time IBMA-winning bassist-clawhammer banjo player-dancer-percussionist Mark Schatz, mandolinist-guitarist Matt Wingate and 21-year-old string wizard Bryan McDowell, who at 18, won an unprecedented Triple Crown at Winfield, Kansas - taking first place honors in the flatpicking guitar, mandolin and fiddle contests. “There’s wonderful live chemistry in this band,” she says. “Granted, the show is focused around me, but it speaks volumes of what we create together.” Her bluegrass bona fides include two IBMA Female Vocalist of the Year awards, but she continues expanding her musical vision, incorporating swing, vintage country, old-timey, Celtic and delicate singer-songwriter balladry. Lynch co-led the acclaimed Alabama-based Front Porch String Band for many years with her ex-husband, singer-mandolinist Larry Lynch, before forming her own Claire Lynch Band, a band that has featured masters like bassist Missy Raines, guitarist Jim Hurst and mandolinist David Harvey.

At the end of 2012, Claire’s long history at the creative forefront of bluegrass and acoustic music earned her a very rare honor, The United States Artists Fellowship. Presented by the philanthropic organization of the same name, the $50,000 grant is given to only 50 of 300 candidates exclusively invited to apply. Awards are presented annually in eight categories - dance, theater, visual arts, media, literature, crafts, architecture and music. Claire was among seven musicians given the Fellowship this year. Since its founding in 2005, only two other bluegrass or country musicians have been so honored - previous winner, resonator guitarist Rob Ickes (who guests on Dear Sister) and fellow 2012 honoree, banjoist Tony Trischka. She performed with both men at a USA gala in Los Angeles in December, in front of a distinguished audience that included two of her earliest inspirations, Jackson Browne and Linda Ronstadt. “It was incredible,” she says. “Something like that really gives you confidence.” All of which makes for a lot of “good ink,” but everything anyone really needs to know about Claire Lynch can be learned simply by listening to the 10 songs on Dear Sister.

Yes, she has a voice like an angel. But a very complicated angel, one fluent in the complete vocabulary of human emotion. Claire has all the basic tools that make a great singer - impeccable pitch, tone and phrasing - but what truly sets her apart is the way she harnesses her considerable gifts to express the feeling as well as the meaning of a song. And she does it so compellingly, we feel it just as vividly.

There’s girlish innocence in the unrequited love song “How Many Moons”; the regret and relentless road weariness in the locomotive rhythm of “Doin’ Time”; her joy at letting her bluegrass pony run in a feisty remake of the Osborne Brothers’ classic, “I’ll be Alright Tomorrow,” featuring Compass co-owner Alison Brown on banjo. On Pierce Pettis’ “That Kind of Love,” she’s the voice of clear-eyed experience. Along the way there’s the full-tilt country of “Everybody Knows I’ve Been Cryin’,” a hit waiting to happen, and “Buttermilk Road/The Arbours,” a song/fiddle tune medley that’s simultaneously contemporary and old-timey, featuring Mark Schatz playing clawhammer banjo and “hambone” percussion, as well as the recorded rhythms of Mark’s dancing feet.

But the emotional lodestone here is the title song, “Dear Sister.” Co-written by Claire and the remarkable Louisa Branscomb, “Dear Sister” has its roots in Louisa’s ’s family tree. “Her great-great-great aunt from Union Springs, deep in Southern Alabama, had four brothers who fought in the Civil War and they all wrote letters home to her,” Claire explains.

The aunt saved the letters in a trunk, where they were discovered more than 100 yeas later. Louisa’s brother Frank edited them into a book entitled Dear Sister. Piecing together information from the letters, Claire and Louisa believe it’s likely that at least one brother fought in the famous Battle of Stones River, on the outskirts of Murfreesboro, Tenn., which lasted three days and resulted in just under 25,000 casualties.

The song imagines what that brother might have written just before the fighting began on Dec. 31, 1862, using historical accounts that tell of each side singing battle hymns until both come together in what was then a fairly new popular tune, “Home Sweet Home.”

It’s on this song you hear very clearly why Claire Lynch is a once-in-a-generation voice. She brings it viscerally to life, capturing the dread of the soldiers waiting to fight, the love of home that inspired both sides and the hope that death is not the end. It all comes together in the heartbreaking way she sings two simple words - “Sweet home.”

Claire Lynch first made a name for herself back in her Front Porch String Band days with another song of home, “The Hills of Alabam”. Today, at the peak of her powers as a singer, songwriter and bandleader, she brings it all full circle with her Compass debut, Dear Sister, taking the classic bluegrass and Americana themes of love and home and making them both universal and utterly contemporary.
31
What's This
Advertisement