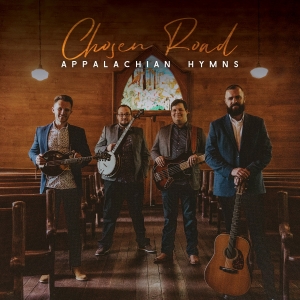 and traditional are two words that seldom find their way into the same sentence yet
perfectly capture the essence of Chosen Road. This unique ability to blend the pure sounds of
Appalachian music with an uncompromising commitment to the Gospel finds them on the road over
150 days a year, moving seamlessly from festivals to fairs to church sanctuaries.
Jonathan Buckner, Zachary Alvis, Tyler Robertson, and Josh Hicks, who make up Chosen Road, are
simply four good friends who share a love for music and a passion for sharing Jesus Christ.
Established in 2009, they have watched in amazement as God has taken their music from the front
porches of West Virginia to audiences as far away as Scotland, France, and Ireland.
With multiple national television appearances and continued radio success, including 6 top ten singles
on Bluegrass Today's airplay charts from the album "The Storm In Me" and a #1 on Bluegrass
Today's Bluegrass Gospel chart, the future seems brighter than ever.
Their recent partnership with Song Garden Music Group yielded immediate results with "Appalachian
Worship," spending over 30 weeks on Billboard Magazine's Top Bluegrass Albums chart and peaking
at #4 with anticipation already building for the soon-to-be-released followup, "Appalachian Hymns."
Even with the successes they have enjoyed, what has not changed is their original commitment to
keep the focus on Christ and Christ alone.
While the music of Appalachia may owe its roots to the ancient sounds of Scottish-Irish descent, it
has found a fresh voice on a road much closer to home. A Chosen Road.
21
What's This
Advertisement