Chip Taylor- A Song I Can Live With 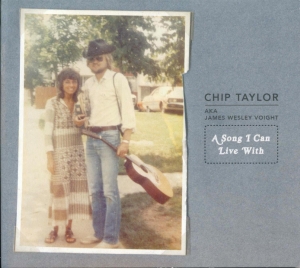 A SONG I CAN LIVE WITH - The Sessions and Songs


I had just finished recording and mixing the Little Brothers album with my friend and co-producer, the amazingly soulful Goran Grini from Norway. I was in New York. There were no tours ahead of me. All of a sudden I started writing again. The songs felt inspired. I sent them to Goran and asked his opinion. He said he loved them.

I asked my friend and cohort at Train Wreck Records, David Knoblock and my music guru friend Hakan Ollson from Rootsy in Sweden if I should record them or wait for a while, due to the problem of scheduling multiple releases. They advised pretty much the same. Hakan said, that this day and age was different. He said “Record them now. If the they turn out good we’ll find a way to deal with them.” David totally agreed.

Goran flew in from Norway a few weeks later. We recorded the new songs in the same manner as last years’ Little Prayers Trilogy - just Goran on keyboards & me (guitar & vocals) with great friend Tony Mercadante at the controls at our little Train Wreck studios in Mamaroneck, NY.

Goran added bass, pedal steel horns and other keyboards in Norway. Then my great friend John Platania added his guitar magic on several up near Woodstock. And here we are with our new album, A Song I Can Live With.


As are most of my songs, all the songs in this album are stream-of-consciousness based. In other words, I didn’t plan on writing about anything particular. In each instance I picked up my guitar and at some point words and music flowed that gave me some sort of chill that inspired me to continue - mainly to find out, as a listener, what I was talking about. With many of these songs I didn’t grasp a meaning until late in the writing process. With some, their meaning changes for me from day to day.

With the exception of a few, these songs were written during an inspired period several months ago. A Song I Can Live With and Little Angel Wings were written at the last moment.

I’ve been blessed to have sung with several wonderful and soulful ladies over the years. We’ve all been pretty crazy from time to time. In many ways I miss singing with all of them. This song ended up being a reflection of that.

This song started simply from feelings of love and pain. Soon I was climbing the stairs of an old recreation center (where I work out a bit most days) which is a few blocks from my New York apartment. Then, all of a sudden David Bowie, Lou Reed and Eric Andersen were in the mix and I liked them in there, and in the end I was learning something.

With New York as its backdrop, this song was inspired by a combination of friends/ acquaintances that I would have liked to have spent more city time with. Some folks, including me, have a hard time staying in one place and nurturing relationships. This is a prayer/wish/hope that some of that might change.

LITTLE ANGEL WINGS
This song was inspired by a coach at the rec center (The 54th Street Rec Center) that I mentioned in the song “Until It Hurts.” I’ve watched coach Lloyd work his magical kindness with seven and eight year-olds on several occasions .. teaching them much more than just how to play basketball.

This song was inspired by and dedicated to, my wonderful wife Joan, who - according to me - worries unnecessarily about too many things. In this song I suggest that she give the problems to me. And that I’ll get to the real truths (“smooth them out”) and give them back to her.... so she can worry less. In the song we happily visit our favorite Japanese restaurant and have some Spanish Mackerel.. “all the way from Spain”.

This song is filled with appreciative looks at the kind spirit of many folks I have met.
My granddaughter Sammy and wife Joan are in there too! By the end, it’s sort of a prayer that all of us (me included) can feel forgiven for whatever weight we carry and move on.

Some songs seem to totally write themselves. And the first time you know them is as a listener. Such is the case with this prayerful one. I picked up the guitar, started playing some flowing and soulful chords.. put my iPhone voice recorder in record mode and started singing. The entire song flowed out of me in one burst with almost zero adjustments. i got chills listening to the playback. It was instantly one of Goran Grini’s favorites. Then, the brilliant Jeth Weinrich was totally moved by it - hence the oh-so-beautiful and touching Jeth video.

This album was basically finished before I wrote this song. After listening to a play back to that early version ... which then was called “Until It Hurts”.. my wife Joan said .. “Oh, that’s a depressing title!”. I decided if she didn’t like it then I couldn’t live with it either. Later that night , “with the Lord’s help”, I wrote a song I could live with. Here’s the intro and first verse.

“A Song I Can Live With

Lord I’m asking you a favor.. before I go to bed
as I pick up this old guitar.. and let feelings dance in my head

10) SAVE YOUR BLUES AND YOUR MONEY

This year, at a birthday dinner in my honor, my daughter Kelly told in detail of her and her family’s experience on their recent vacation in Antigua. Her story included a view of the shacks along the dirt road on their way to “paradise” behind an iron gate (the Carlisle Bay Hotel). Kelly’s words conjured up mental pictures of lots of English folks, Russian business men with their young girlfriends and happy natives diligently maneuvering their nets to catch an amazing amount of fish to sell to the rich folks right there on the rich folks beach.

The following day I started a flow of words and music that, despite not knowing what the words meant, gave me a chill . Fairly soon I was on that island with Kelly and through her eyes capturing a glimpse of what she had seen. Thanks Kell, what a great birthday present!

Note: this was the one song I recorded a few weeks after the original group. Huge thanks to Tony Mercadante who was engineering the session and encouraged me to continue when I was struggling with the finger picking guitar pattern. Tony said, ‘just keep going.. this is going to be great!”. Quite simply, I would have stopped if he didn’t say that.

This is certainly one of my favorites. A bed-time view of a show televising live horse races inspired this song. The hero here is an actual horse trainer from Los Alamitos Race track in southern California, John Cooper. I get chills every time I’m reminded by this song of John’s thoughts as to how to view life’s victories.

I LOVE this one so much! It started with.. “like a prayer in church from a priest..” I got such a warm, prayerful chill when the first verse flowed out of me. Then, toward the end, it told one of the most beautiful stories I know.

My wife Joan’s little jewelry store went bankrupt not too long ago. She has time on her hands now. She and a few of her friends decided to donate some time each week to help youngsters who are lacking in certain skills - mostly reading. Joan is one of those people who never thinks of herself. She always thinks of the other person. Now she’s doing it for a few kids. I love to hear her stories after her sessions. She has such a beautiful sparkle in her eyes when she speaks of the kids. At her first session she thought the reading wasn’t quite connecting with the little girl, so she started playing “hangman” - the spelling/word game - and the child’s eyes lit up, as did Joan’s. So hangman is part of all Joan’s sessions now ... and that story is a beautiful part of this final song.