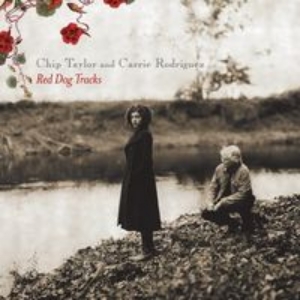 Chip Taylor and Carrie Rodriguez simply make magic. Evidence: Red Dog Tracks (2005). The short-lived but potent Americana duo's final album – following 2002's Let's Leave This Town and 2003's The Trouble with Humans – deftly showcased two singular voices marrying into a perfect blend. Excellent news: After being out of print for years, Red Dog Tracks is back – and with bonus tracks! (“Willow Garden,” “Unglorious Hallelujah,” and an alternate take on the title song have been appended to this 10th Anniversary edition.)

“Folk music – Americana, singer-songwriter, alt-country – doesn’t get much better than this,” No Depression said about the record. “Here is the new standard of duets that all others should be judged by.” Red Dog Tracks peaked at #3 on the Americana chart and #1 on the European Independent Country Chart. The lead single, Keep “Your Hat On Jenny” spawned a great video directed by Traci Goudie (Patty Griffin, Richard Linklater, Emmylou Harris). Additionally, Rodriguez became a co-producer with Chip and brought in an entirely new band, featuring the master Bill Frisell on guitar. The resulting record was their crowning achievement.

Quick background on this seamless partnership: Chip Taylor was a legendary songwriter (“Wild Thing,” “Angel Of The Morning”) returning to music in 2001 when he saw Berklee-trained Carrie Rodriguez playing fiddle on stage in Texas. He added her to his touring band and after pushing her to give singing a try and within weeks their duets were the highlights of the show. Shortly after, Taylor wrote an entire album of songs for the two to sing together and a short, yet powerful, partnership was born. His sharp songwriting has never shined more brightly.

“I just want to get some sort of a chill from a song,” Taylor told CMT. “I mean, I know when I was a kid and listening to the early Sun records or the race records, I go back now and listen and I didn’t even know half the lyrics. I was singing them wrong, but it didn’t make any difference. It was the feeling you get from them. A great song just communicates. It doesn’t have to communicate in your language. A person who doesn’t speak a word of English can still get totally carried away by 'Wild Thing' or 'Angel of the Morning.' There’s a spirit that transcends words.”
15
What's This
Advertisement