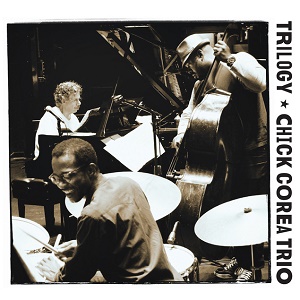 Sept. 9, 2014 release ranges from reinventions of classic Corea compositions and previously unrecorded originals to an array of jazz standards and even freshly re-imagined Scriabin (international release dates may vary)

“The diaphanous music that Corea, McBride and Blade unveiled only could have been created by the three of them at once. Theirs was a complex, finely woven sound, the musicians trading phrases and ideas with uncommon delicacy and ease.” — Chicago Tribune

Chick Corea – an NEA Jazz Master and winner of 20 GRAMMY® Awards – has been a prime mover in jazz ever since the late 1960s, when the keyboardist was a youngblood in the electrifying jazz-rock ensembles of Miles Davis. Corea has made classic records as a leader both in acoustic mode (such as the star-making Blue Note trio album Now He Sings, Now He Sobs) and electric (the pioneering ’70s fusion of Return to Forever), as well as collaborating on acclaimed albums with peers from Gary Burton to Béla Fleck. On September 9, 2014, Stretch Records/Concord Jazz will release Trilogy – a recording to rank with the landmarks of Corea’s career. Trilogy is a triple-CD set recorded live around the world with his spectacularly virtuosic trio featuring bassist Christian McBride and drummer Brian Blade, both star leaders in their own right (and previously the rhythmic backbone in Corea’s Five Peace Band). In an interview with Spain’s El Pais, Corea said about them, “Both are master musicians and together we have an easy rapport. There is a lot of give and take in our music. It’s always a lot of fun.” And reviewing one of the stops on the trio’s two globe-trekking tours, All About Jazz noted, “Corea, ever the mischievous, puckish protagonist, created a context where the music centered on high-spirited playfulness: pushed and pulled, twisted and turned, and obliquely refracted – as much about the journey as it was the destination.”

A marvel of live recorded sound, particularly for having been captured in multiple stops on the road, Trilogy sees the trio reinvent classic Corea compositions (such as “Spain”), as well as previously unreleased originals (“Piano Sonata: The Moon”). The group also performs an array of jazz standards (including two Thelonious Monk tunes) and even re-imagines a Prelude by fin-de-siècle Russian composer Alexander Scriabin (“Op. 11, No. 9”). The recordings were made live in Washington, D.C., and Oakland, CA; in Spain, Switzerland and Austria; and in Slovenia, Turkey and Japan. Corea, McBride and Blade are joined by special guests on three tracks: flutist Jorge Pardo and guitarist Niño Josele in Madrid (“My Foolish Heart” and, aptly, “Spain”) and vocalist Gayle Moran Corea, the pianist’s wife and longtime collaborator, in Sapporo (“Someday My Prince Will Come”). About one of the concerts, WUVT Virginia said, “The performance was mostly fun and relaxed, but as expected from Chick Corea, it had its moments of deep thought in which the music could bring tears to one’s eyes.”

Corea calls the trio experience with McBride and Blade “a joyful exploration,” adding, “There’s a certain chemistry that happens, which is really difficult to describe – it’s simply that thing that happens when the three of us get together to play. I know I find myself trying things that I wouldn’t normally try. The game of live performance – for a performer and a listener – is one of the most basic human pleasures. For me, certainly, the best and most rewarding thing I know to do in music is to play live for a live audience. And no matter how recordings and the mass consumption of music evolve, the fundamental musical experience will always be a live performance. A live album like this is the next best thing to being there, a snapshot of special moments in musical time that we can share.”

One of the album’s special moments is the trio’s interpretation of Thelonious Monk’s “Blue Monk.” Along with the sheer life-affirming delight of Corea’s piano in this number, it’s the old-wood tone and earthy swing in McBride’s solos that are a particular sensual pleasure. About the bassist, Corea says, “Christian is a complete musician in all senses. With total command of his instrument and a flowing ability to creatively improvise in any situation, he’s able to bring joyful surprises every time.”

Reviewing the trio’s show at the Highline Ballroom in Manhattan, The New York Times singled out Blade’s contribution as “a crucial factor” to the group’s sound: “Tapping into the deeper currents, Mr. Blade can be startlingly dynamic.” His traps solo on Corea’s vintage composition “Fingerprints” is as rich in color as it is in groove. “Brian is totally unique as a drummer and a highly accomplished musician,” says Corea. “He doesn’t just ‘keep time.’ He colors and comps and orchestrates everything he plays. He transcends the instrument he plays – he’s amazingly artistic.”

In its review of the trio’s concert at Orchestra Hall in the Windy City, the Chicago Tribune singled out Corea’s “feathery touch” in Kurt Weill’s “This Is New,” his “soft tone, free-ranging lines and mercurial rhythms quickly echoed by McBride and Blade. Here were three musicians discarding conventional notions of phrase and song structure, of solo and ensemble passages. Instead, they created a free-flowing, translucent music that thickened or thinned, sped up or slowed down according to the impulse of the moment.” The Tribune also highlighted the trio’s re-envisioning of Scriabin: “The Russian iconoclast's extended harmonies and mystical yearnings are ripe for jazz improvisation. Corea proved the point, riffing on Scriabin with fleet and silvery lines, the pianist’s nervous energy intensified by McBride’s restless phrases on bass and Blade’s shimmering statements on drums. In effect, Corea’s trio got under the skin of music penned on another continent roughly a century earlier – through jazz.”

Corea has always had a special feel for Spanish music, tapping the spirit of Rodrigo for his classic “Spain,” among many other of his pieces that explore Iberian colors and rhythms. Corea recalls the performance of “Spain” included on Trilogy: “The night in Madrid with Jorge Pardo and Niño Josele was magical. It was our final trio concert of that particular tour – and, of course, Jorge and Niño are stars in Spain. You can feel the audience and band’s excited vibe on the recording.” The new piece “Homage” is another in that line, a tribute to the late flamenco guitar genius Paco de Lucía. Corea explains, “This is my homage to flamenco musical roots and culture – so warmly shown to me by the great Paco de Lucía along with Carles Benavent, Jorge Pardo and Rubem Dantas, all of whom were integral members of Paco’s bands for two decades. ‘Homage’ is my tip of the hat and thank you to him and the beauty of this musical culture.”

The previously unrecorded “Piano Sonata: Moon” is the most expansive performance on Trilogy, at an epic half an hour. It’s kaleidoscopic and utterly absorbing music. “This is the first movement of a piano sonata that I began composing several years ago but never completed,” says Corea. “I thought it would be ideal to expand it in this trio setting since Christian and Brian are so adept at reading and interpreting tricky scores. We spent time weaving together the written sections with the improvised sections.”

Trilogy also features interpretations of items from the Great American Songbook: “My Foolish Heart,” “It Could Happen to You,” “How Deep Is the Ocean?” and more, all performances of grace and freshness. The album closes with “Someday My Prince Will Come,” with its guest vocal. Corea says, “My sweet wife, Gayle, always brings the kind of warmth and lyricism to the stage that I love.”

Much of the pleasure in Trilogy is the sheer beauty of the recorded sound, always a challenge to achieve on the road with varying acoustics and equipment. The gorgeous result – full of high-definition depth and detail – is the product of “the deep understanding and artistry of my recording engineer, Bernie Kirsh, who is a genius and with whom I have collaborated since 1975, when we made The Leprechaun together. The techniques that he developed through the years plus the rapport we both have for the kind and quality of sound we love led to the very highest quality live recordings. Brian Vibberts did a great job of mixing on this one, with my and Bernie’s long-distance input. I think we made for a good three-way team.”

Summing up Trilogy, Corea says, “I’ve made a life of learning and inventing ways to make music, but it often seems unproductive for me to try to describe it in words. But I have one about working with this trio and making this live album: pleasure. I hope listeners experience the same.”