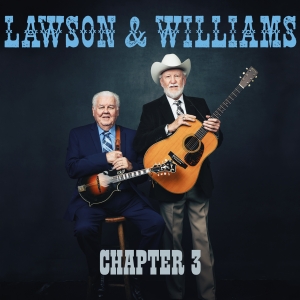 Most everyone knows that I began my professional career playing banjo and singing baritone for Jimmy Martin and his Sunny Mountain Boys. The vocals were fairly easy for me but the banjo, not so much. Still, I hung in and did my best to play that “Martin” sound. Jimmy, Paul Williams and I made up the vocal trio at the time, but I never got to record with Jimmy while Paul was in the band. Years went by and I had the good fortune to work with some notables in the world of bluegrass. In addition to Jimmy, J.D. Crowe, Charlie Waller, Bill Emerson and Bill Yates were contributors to the fact that I am approaching 54 years playing professional music. One thing I thought about a lot was the regret I felt never having the pleasure of recording with Paul Williams. That desire was fulfilled when Paul, J.D. and I did the “Old Friends Get Together” cd as a tribute to the gospel music of Jimmy Martin. I never thought about doing another one but when asked if we would, I immediately said yes. “Standing Tall and Tough” was recorded and released in 2014, and it really highlighted Paul’s amazing voice. J.D. pretty much retired in 2015, ending almost 50 years of picking together at various times. Even though I left his band on August 31, 1971, we still did a lot of recording and some touring as well. He was on my first solo recording, “Tennessee Dream”. Later J.D. and I did six albums as part of the Bluegrass Album Band with guitar legend, Tony Rice, fiddlers extraordinaire Bobby Hicks and Vassar Clements, resophonic guitar wizard, Jerry Douglas, and rock solid bass men, Todd Phillips and Mark Schatz.
After J.D. retired, I didn’t give much thought to whether Paul and I would continue to make personal appearances or record. Well, Paul decided for me when he called and asked if we were going to do another cd. I said, “Do you want to?”, and he answered “Yes, I do.” I said “Let me call the label and I’ll get back to you.”
So here we are, 2017, and this is Chapter 3 of our musical endeavors together. I think the cd title, Chapter 3, lends itself admirably to the songs presented here. We sing about love, hope, commitment, heartache, despair, regret and God’s love for us. Eight of the songs come from various singer and songwriters. Paul again shows his amazing skill as a writer with three of his more recent compositions. Over the years, Paul has written some of the standards one still hears today. I think the three on this cd are second to none. Listen to him sing “Abigail” and you’ll hear what I mean. Rather than going through each song and sharing my thoughts, my hope is that you listen and enjoy what we did as much as we enjoyed doing it! Paul and I thank you from deep in our hearts and we thank God for giving us the ability to do what we do.