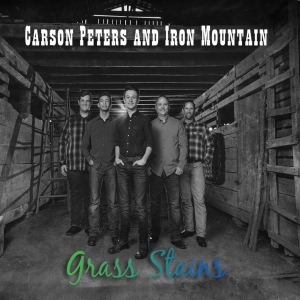 Grass Stains is a collection of some of our favorite traditional bluegrass songs, old country hits done our way, and original songs that we hope you love as much as we do! Thank you so much for supporting our music. God Bless!

2 Corinthians 9:8
And God is able to bless you abundantly, so that in all things at all times, having all that you need, you will abound in every good work.

Special Thanks:
*First and foremost, thanks to GOD for our salvation, our talents and opportunities with which He has blessed us. *Our family and the friends that rarely miss a local show! *For the many people who have supported and encouraged us along this journey. *Robin Peters for being the “momager” and for taking care of merchandise and sales at our shows. * Michael Rogers *Josh Swift *Cora Wagoner *Blue Chip Picks *John Pearce Banjo Strings *Ear Trump Labs * Brad Mullens / Army Navy Store, Marion VA *Lakota Leathers *Harrison Straps *Collins Capos *Town of Marion VA * Ernie Sullins Clothing

Carson Peters and Iron Mountain is a high-energy, traditional bluegrass band based in the Appalachian Regions of NE Tennessee, SW VA and Eastern NC. The band is led by Carson Peters, a young music prodigy from Piney Flats, TN. He has been playing music and entertaining audiences since the ripe old age of 3! Carson has been blessed to make numerous national TV appearances including his latest as guest fiddler for Mr. Ricky Skaggs during the 52nd Annual CMA Awards. Carson is blessed to get to tour the US and Canada entertaining audiences with his band IRON MOUNTAIN; an awesome group of Christian musicians that he also calls his best buddies. The band consist of Eric and Ben Marshall from Mt. Airy NC, Austin Tate from Marion VA and Carson’s father Jamie Peters. Carson and the band love to play bluegrass, bluegrass gospel and “grassed-up” vintage country. Their love for God and playing music is a contagious atmosphere and brings smiles to their audiences.
18
What's This
Advertisement