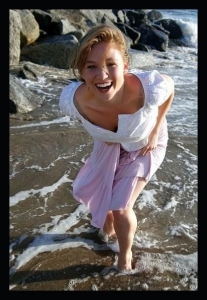 Carolyn Nicely was singing Joni Mitchell while camping in New Mexico, when a fellow camper and music festival promoter from Mitchell’s hometown in Canada literally popped out of the woods and gave her his business card. She has also been likened to Jewel and Tracy Chapman. Carolyn began her music career on stage at the age of 12 playing Annie for the Fredericksburg Theatre Company in Virginia, her home state. She spent her school years trying to balance singing, dancing and performing with playing varsity soccer. Music won out. She graduated in 2009 from UCLA’s School of Theatre, Film and Television. While there, she was a soloist with the singing group Awaken a Capella, following in the footsteps of Sara Bareilles. A summer spent working in Ireland inspired Carolyn to pick up guitar and lay down her lyrics. She spent this last year writing, performing and recording in the Orlando/Daytona Beach area with a great crew from Full Sail University. She is now back in Los Angeles to promote her new CD Floating on Eire.