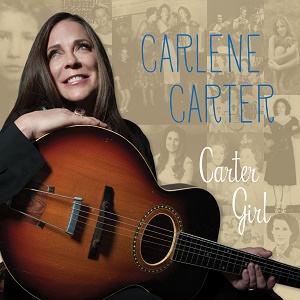 With Carter Girl, Carlene Carter once and for all proclaims who she is.

Her first album for Rounder, it features songs spanning the Carter Family generations, including celebrated Carter Family songs like “Gold Watch And Chain,” and others written and performed by the descendants of the original Carter trio—including Carlene herself.

Not that she’s ever shied away from being the heiress to the legacy of country music’s foremost family. “I always include at least one Carter Family song, or one written in the Carter Family spirit,” says Carlene, citing as a pertinent example “Spider Lace,” which appeared on her deeply personal last album, Stronger (2008).

“I wrote it thinking of the Carter Family’s flowery lyrics and romantic themes,” she says, noting, too, that the Carter Family catalog is heavy both on songs of faith and far darker fare. Turning to Carter Girl, she notes that all these facets of the Carter Family’s pioneering work which are reflected in a stunning album achievement that honors her ancestors while confirming her proud place among them.

She is, of course, the daughter of 1950s country superstar Carl Smith, and June Carter Cash, who was herself the daughter of Maybelle Carter—“Mother” Maybelle Carter of the original Carter Family trio that formed in 1927 in the tiny Southwest Virginia hamlet of Maces Springs. Along with Mother Maybelle’s brother-in-law, A. P. Carter, and his wife and her cousin Sara, the Carter Family recorded such seminal country music songs as "Can The Circle Be Unbroken (By And By)," "Wildwood Flower" and "Keep On The Sunny Side,” and forever influenced the development of bluegrass, folk, pop, gospel and rock music genres, as well as country music.

Mother Maybelle Carter and her daughters June, Helen and Anita, later performed as Mother Maybelle & the Carter Sisters, and after Maybelle’s passing, as The Carter Family, of which Carlene was a part for a time in the late ‘80s. But with the 1978 release of her self-titled debut album, Carlene Carter established herself on the edgier end of the country music spectrum, having recorded it in England with Graham Parker’s band The Rumour.

Two years later, with her acclaimed third album Musical Shapes, she covered Johnny Cash’s classic “Ring Of Fire,” which her mother co-wrote for her future husband, and A.P. Carter’s “Foggy Mountain Top,” while co-writing “Appalachian Eyes,” a beautiful song suggesting in tone the music and region of her ancestry.


She had her biggest hits in the ‘90s, with “Every Little Thing” and “I Fell In Love” both reaching No. 3. The latter was the title track of an album that also included “Me And The Wildwood Rose,” a song that she wrote about being a Carter girl, which she most fittingly revives on Carter Girl.

“I wanted to write a song about what it was like being a little Carter girl, and how me and my sister Rosey grew up and would travel to shows in the back seat of a car when we weren’t in school, and then get pulled on stage way before we were ready!” Carlene recalls. “But when I sing it now I get emotional because I think of all of them, and they’re all gone—including Rosey.”

So it is with a strong sense of responsibility and commitment that she selected the songs for Carter Girl, as well as the creative team needed to fully realize her vision.

The songs were chosen to represent all who came before. “I wanted to show the progression of the songwriting and singing through the Carter Family generations,” Carlene explains. So besides several A.P. Carter compositions (including “Gold Watch And Chain”), she includes Helen Carter’s “Poor Old Heartsick Me” (one of Carlene’s favorites since childhood), the Carter Family’s lovely “I’ll Be All Smiles” (because of the memory of her Aunt ‘Nita singing it and harmonizing so beautifully with the other Carter girls) and her mother’s “Tall Lover Man.”

“It’s one of Mama’s ‘murder mayhem’ songs, from [her Grammy-winning 1999 album] Press On,” Carlene says. “It’s pretty dark in content, and very Carter Family-esque: So many of their songs involve cheating and killing the guy—or praying to Him, since maybe 75 percent of their songs were religious or faith-bound.”

So she put her self-ascribed “Carlene rhythm” on it—her version of her grandmother’s famed “Carter scratch” acoustic guitar-picking technique—to give it more drive.

For her grandmother’s “Troublesome Waters,” which Mother Maybelle co-wrote with her husband Ezra Carter and Tom T. Hall’s wife Dixie Hall, Carlene enlisted duet partner Willie Nelson, “one of the only people still living who was very close to my father, my mom, my grandma, aunts, John—everybody. I wanted to have some people on the album who were close to my family.”

Kris Kristofferson, who was also very close to Mr. and Mrs. Johnny Cash, duets with Carlene on A.P. Carter’s “Blackjack David.” Vince Gill harmonizes on her adaptation of the Carter Family’s “Lonesome Valley” (Carlene’s “Lonesome Valley 2003” evokes the passing of her mother and stepfather), and Carlene’s “adopted sister” Elizabeth Cook joins her on the Carter Family’s “Blackie’s Gunman.” And on A.P. Carter’s “I Ain’t Gonna Work Tomorrow,” The Carter Sisters, Johnny Cash, and the acoustic guitar of the late Cowboy Jack Clement appear on a backing track that was recorded for an album that was released only on cassette and vinyl during the time that Carlene was working with the Carter Family.

Carter Girl was produced by Don Was. “I knew that he would bring the right people to play on it,” says Carlene. “I really believe in the power of the universe, and because this particular record had such ‘heart value’ in it for me in carrying on the Carter Family legacy, I needed it to be the best it could be. Don was the right man for the job.”

After studying the massive In The Shadow Of Clinch Mountain box set of over 300 Carter Family recordings (“the bible of the Carter Family!”), Carlene chose songs that resonated personally.

“We’d go into the studio and play them the way I learned them, and the guys found an extra edge and brought them more up-to-date,” she says. “I had to really challenge myself to do it, and listened for hours on end and practiced for about a year to play the way Grandma did.”

The result is an album that “has been in my brain my entire career,” says Carlene. “I’m responsible for carrying on the legacy of the family and being a ‘Carter girl,’” she concludes. “That’s why I chose the album title. And I believe I’ve pretty much accomplished that with Carter Girl, and for that I’m really proud.”