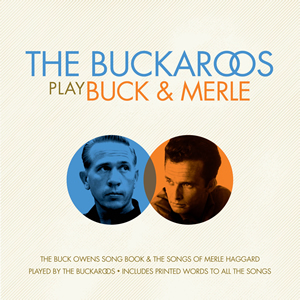 The Buckaroos salute Buck & Merle! Their first and last LPs from the pioneers of the Bakersfield sound together on CD for the first time!


When a young Merle Haggard played in Buck Owens’ band, he suggested the name “Buckaroos” for the combo. While Merle’s tenure in the band was short-lived, he did pretty well for himself afterward. And The Buckaroos name not only stuck, but the band became almost as notable as their leader. Their playing became as noticeable as Buck’s distinct songwriting and delivery.

So, it was only natural that The Buckaroos first LP would be a tribute to their leader. The Buck Owens Songbook was released in 1965 and gave fans a chance to sing along with their favorite Buck hits with The Buckaroos as their backing group—lyrics provided. Six years and 10 albums later saw the band pay tribute on their last LP to the man who named them. The Songs Of Merle Haggard appeared in 1971, and featured The Buckaroos’ instrumental take on classics like “Mama Tried” and “Okie From Muskogee.” Sadly, that LP didn’t come with a lyric booklet like its predecessor.

It seems natural that these two releases should be joined together on one compact disc paying tribute to the leading pioneers of the Bakersfield Sound. The Buckaroos Play Buck & Merle features all 22 songs from both original LPs. And, this time, in addition to the words to the Buck songs, we’re providing the lyrics to the Merle tracks, too! Add in original artwork, rarely seen photos, plus reminiscences from Buckaroos Willie Cantu, Doyle Curtsinger and Jim Shaw, and you’ve got a release that is gonna make you want to sing! And, who better to back you up than The incredible Buckaroos!
18
What's This
Advertisement