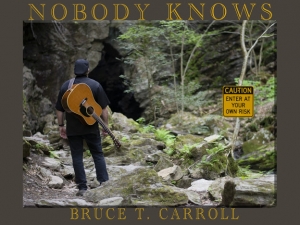 BRUCE T. CARROLL - With the release in 2017 of his first official album Ruckus and Romance, hailed by No Depression Magazine as "devilishly brilliant" and "intensely beautiful", Bruce T Carroll established himself as an Americana artist with a social conscience and deft lyrical touch. Using irony and imagery as tools in trade, and a band of great musicians to back him up (Clifford Carter, David Spinozza, Marc Shulman, Sara Milonovich, Tracy Grammer, Nicole Alifante, Porter Carroll, Lincoln Schleifer, and Joe Bonadio) Bruce made Ruckus and Romance a distinctive debut, and his song "When Two Worlds Collide" helped bring the worldwide refugee crisis into sharp focus. Ruckus and Romance garnered significant airplay worldwide, including being featured on WFUV's "On Your Radar" hosted by John Platt, who called it "an accomplished album, attuned to the zeitgeist of the moment".

Bruce followed up only one year later (2018) with the release of the six-song EP Finding You. The album is a sort of lyrical tone poem, with the theme of finding, or regaining, something that had been missing, or lost. What had been lost at that time, it seemed, was the very soul of the nation, mired as it was in the throes of right-wing governance that sought to undo a century of progressive gains. The signature song on the record, "Fox in the Henhouse" may still be Bruce's definitive statement on what was then the state of the union, and an apt description of the man (now deposed) who almost stole our democracy. Another song on the record, called "I Will Never Leave", is an anthemic statement of the intention to resist and, ultimately, to remain. Produced by Andy Stack, this Finding You features stellar performances by Stack (guitars, bass, keyboards), Sara Milonovich (violin), Lee Falco (drums), Jeremy Baum (organ, accordion) Brandon Morrison (bass), and Adrien Reju and Melissa Ahern (vocals)...

In March, 2020, Bruce T Carroll released a powerful new song and video called "Lift Your Head Up". It was, in essence, a call to action. A call to activism. A call to acknowledge the extreme and abject conditions suffered by so many in this world and a commitment to do something about it. It is a work that represents all that Bruce has sought, through artful songcraft and powerful music, to convey to the world. As he prepares to release his fourth record in as many years (June 2021), Bruce's belief that music and social conscience derive from the same wellspring of humanity continues to drive him forward.