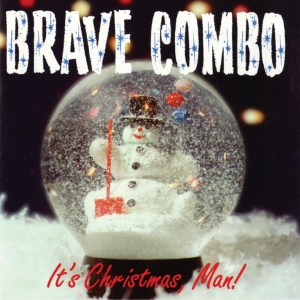 Applying the polka and world-music dance treatment to a most unlikely song lineup ("People Are Strange," "Sixteen Tons," "In-A-Gadda-Da-Vida," "O Holy Night"), Brave Combo formed in the late '70s in the small Texas hometown of vocalist and guitarist Carl Finch, recorded three albums for the self-owned Four Dots label, and later moved to Rounder. The group's line-up, though constantly shifting, began to coalesce around Finch, horn player Jeffrey Barnes, bassist Bubba Hernandez, and either Mitch Marine or Joseph Cripps on percussion. After signing with Rounder in the late '80s, Brave Combo released the 1987 compilation Musical Varieties before recording nine albums with the label by the mid-'90s. The group also backed up pop figure Tiny Tim on his last collection of songs, 1996's Girl. Polkasonic followed three years later, and in the spring of 2000 Brave Combo resurfaced with Process. After recording a live album for Cleveland International (Kick-**** Polkas, 2001), in 2003 they returned to Rounder for Box of Ghosts, a collection of classical themes dressed up Brave Combo style. Among various other recording and performing activities during the 21st century, the band also appeared on avant accordionist extraordinaire Guy Klucevsek's The Multiple Personality Reunion Tour in 2012.
10
What's This
Advertisement