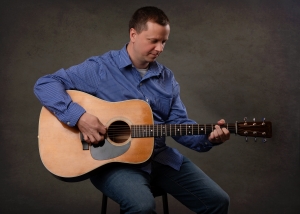 Brady Stogdill first started playing guitar around the age of 10. His dad Dean Stogdill was a banjo and guitar player and taught Brady some chords on the guitar. A few months later Brady went to a local jam in Norman, Indiana with his dad and has been hooked every since.

About a year into playing Brady started going to local jams and open stage nights with his Dad in the Scottsburg and Henryville area where he met a local named Michael Cleveland. From there he played for a few years in a band with Cleveland and his dad along with a few other local musicians.

In 1993, Brady got a break to become the bass player of a kids group that was formed by Pete Wernick for the IBMA award show that would be known as the Bluegrass Youth All-Star Band. This band consisted of Josh Williams, Michael Cleveland, Chris Thile, Cody Kilby and himself. The performance was filmed and aired on TNN and featured on a Bluegrass DVD called Gather at the River. The following year after a few band member changes Brady came back to the band to play guitar and perform at the 1994 IBMA FanFest and a few local festivals with the group who signed with New Haven Records on Music Row in Nashville, TN.

In the year of 1995 Brady was asked to start setting in with a local group out of Bloomington, IN that in its own right had some established musicians from the bluegrass community. For the next 19 years Brady would perform with this band known as the Not Too Bad Bluegrass Band that consisted of founding members Brian Lappin and Doug Harden. Other members who made up the band were Kent Todd and Greg Norman. They would go on to perform many local gigs, Bluegrass Festivals, local Radio, TV and eventually be chosen to represent the state of Indiana and play the Library of Congress and the Kennedy Center. In this time they recorded two albums called Butcher Boy and Head Full Of Memories.

With the Not Too Bad Bluegrass Band going into retirement around 2012, Brady has now stepped out with a new solo album called Better Late Than Never that consists of many great musicians and singers on it including Grammy Award Winner Michael Cleveland who plays fiddle and mandolin on all the tracks. Taking the spotlight and being the front man for the first time in his musical career, Brady is excited for this new challenge and to share what he has to offer to the Bluegrass world!