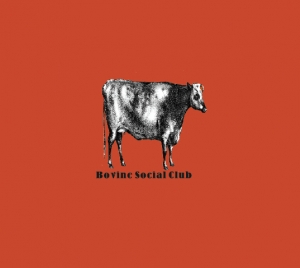 BCS Lands a Stellar Jamband Review! Yeehaw!
Eclipso RecordsCombining the eclectic acoustic bounce of early Boris Garcia, the worldgrass vibe of Railroad Earth, and a grittiness all of their own that’s nothing but real, Bovine Social Club’s self-titled debut album is ten tracks of fun, fun, fun – and great musicianship.It certainly didn’t hurt matters that BSC’s maiden voyage in the studio was skippered by Tim Carbone. Railroad Earth’s fiddling guitarist has plenty of production magic to his credit – albums by the previously-mentioned Boris Garcia, The Ragbirds, Great American Taxi, David Gans, Greensky Bluegrass, and his own project The Contribution, to name a few – managing to add another dimension to the sound of whatever already-talented band he works with. Oftentimes Carbone has also added some fine fiddle to complement his collaborators’ sound, but he doesn’t pick up the bow for Bovine Social Club. The killer fiddle you hear throughout the album is BSC’s own Seth Mandel (when he isn’t picking some sweet mando or adding a layer of just-right keys). Imagine having Carbone on hand – who can lay down the essence of anyone from Aaron Copland to Frank Zappa with his fiddle – and not needing to call him in off the bench. Uh-huh: Mandel is that good.But so is the rest of Bovine Social Club. Scott Hornick takes his big ol’ upright bass to places you wouldn’t think it would even fit, teaming up with drummer Jeff Barg to lay down all sorts of grooves. Guitarist/banjo picker Johnny Smith is a great foil for Mandel with some of the album’s coolest instrumental moments being Smith’s electric guitar weaving with Mandel’s fiddle.And then there’s frontman Samuel Saint Thomas – the source of that grittiness we talked about earlier. There’s a swagger to Saint Thomas’ vocals that never comes off as cocky – it’s easy to imagine him leading The Pogues or Joe Strummer’s Mescaleros into musical battlegrounds … it’s that kind of swagger. In the meantime, his lyrics paint big pictures full of big characters with big emotions. And his bandmates know just how to build the sceneries for those pictures, characters, and emotions to dwell in.Tunes such as “Picnics” and “Saweeet” are infused with a rubbery-legged, goofy-grinned Mr. Natural-style vibe – in fact, if R. Crumb’s bearded wiseman ever laid into an electric guitar, I’m betting it would sound just like Johnny Smith’s moments of twang rapture on “Saweeet”. “Picnics”, in the meantime, is pure banjo-powered inescapable, infectious joy – the kind of joy that comes from lying on a blanket with your baby: “jalapeno peppers and a chunk of cheese/wave my pickle in the breeze.” I mean, does it get any better than that?The namesake of “Banjo Gini” is a “curious and peculiar” gal who “don’t wear no underwear” – and her tune is as bawdy and rollicking as you would expect. Barg and Hornick have a blast laying down butt-shaking wah-bump-bumps, while Mandel takes off on a mando solo that goes from quasi-Gypsy jazz to a quote from “Buffalo Gals” before it’s through. Saint Thomas’ hippie-boy rambler in “Stuck In Colorado” seems to have it figured out until one dumb move finds him with “a Boulder on his back.” (Check out Smith’s cool volume swells that usher in his guitar break.) “Careful As You Go” is as sad/sweet/sad as sad/sweet/sad gets – a lovely “so long” from one who has to stay behind.“Twelve Years In A Jar” and “Pickin’ Jamboree” are perfect examples of Bovine Social Club’s multi-level sound: Saint Thomas’ lyrics for “Twelve Years” are right-on, raggedy-assed Beat zen wisdom at the ground level; in the meantime, Caribbean-scented breezes blow overhead, carrying bits of mando, mbira, and guitar chirps along with cool drums and bass. “Pickin’ Jamboree”, in the meantime, is a straight-from-the-field-to-the-dancehall hoedown, all sweaty-headed and dirty-kneed yee-haw. In many ways the two tunes couldn’t be more different; at the same time they’re both perfect for Bovine Social Club.Bookending the album are the buoyant “The Rayban Song” and the beautiful closer “Naked Now”. “Rayban” features plenty of cool wit from Saint Thomas and some neat, intricate hey-diddle-diddle harmonies joining Mandel’s fiddle and Smith’s guitar; “Naked Now” is as lay-it-all-out-there as the title suggests. What Saint Thomas’ lyrics don’t do to your heart is finished off by the long slow dance performed by Smith’s ache-soaked guitar and Mandel’s sympathetic violin. The fact is “Naked Now” had to end this album; it’s Bovine Social Club’s “Moonlight Mile”.Every now and then you discover debut albums that deliver the goods. This one delivers them, puts everything away in the cupboards, washes the windows, breaks your heart, makes you smile, slaps you on the fanny, and tucks you into bed. Pay attention to Bovine Social Club. *****Brian Robbins has picnics with his baby at www.brian-robbins.com

Blurbs
“Working with Bovine Social Club was a unique pleasure. They were always up for an adventure, and that sense of adventure is totally evident in their music.” -Tim Carbone, Railroad Earth

“Bovine Social Club is the Northeast’s best kept secret. With just one listen to their debut CD of country flavored folk rock, it will be easy to understand why this secret won’t be kept long.” -Tom LeFevre, Main Street Jukebox, Stroudsburg, PA

“BSC combines poetic mentality, deep grooves, A-list song writing, and a musical sense of humor that leaves you with that “what are they gonna do next good time feeling.” -Lenny Bloch, WCBS, New York, New York