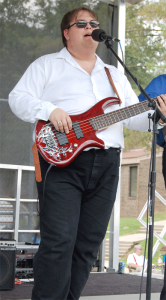 Boj was born June 9, 1987 in Nashville, Tn., into one of the first families of Bluegrass Music.
His father is Grand Ole Opry Legend, and two-time member of The Bluegrass Hall Of Fame, Bobby Osborne, easily one of the most important performers in Country and Bluegrass Music history. A musician whose contributions are so large and varied, that he truly changed the musical world.

His uncle is Bluegrass Hall Of Famer Sonny Osborne, one of the most important and innovative banjo players and baritone singers in history.
His first cousin is Dana Williams, a member of The Grand Ole Opry with the group Diamond Rio. His Aunt Louise wrote the bluegrass classic “New Freedom Bell”, his Aunt Judy wrote the bluegrass classic “One Tear”.
His brothers Robbie and Wynn were both members of The Osborne Brothers Band for years.

His father, Bobby Osborne, also made his mark as a songwriter, writing some of the most famous songs in the history of Bluegrass Music, classics such as: “Windy City”, “Bluegrass Express”, “Big Spike Hammer”, “Son Of A Sawmill Man”, “With A Pain In My Heart”, “Memories”, and “This Heart Of Mine Can Never Say Goodbye”.
Bobby also revolutionized mandolin playing, and forged one of the most iconic singing styles in all of Country Music.

Boj literally grew up in Dressing Room #2 at the Grand Ole Opry House.
That Dressing Room was home to The Osborne Brothers, Bill Monroe & The Blue Grass Boys, and Jim & Jesse & The Virginia Boys.
That’s the world Boj has grown up in.
He grew up knowing, and hearing the true Giants of the Bluegrass Music business of the Twentieth Century.
He got to witness and study up close, how they went about their craft as professional musicians AND entertainers.

One aspect of the Country Music business that has stood it in good stead since it’s inception, is the concept of the “apprenticeship”.
Be it Lester Flatt, Earl Scruggs, Sonny Osborne or Del McCoury with Bill Monroe; or The Wilburn Brothers with Webb Pierce; or Jack Greene and Cal Smith with Ernest Tubb; or Ricky Skaggs and Keith Whitely with Ralph Stanley; the concept of the young artist working with the established veteran, and both learning his craft and getting to hone his skills in front of a crowd under the tutelage of an established star act, has always grown and advanced the music.

That’s the case with Boj. At the young age of 24, (he was actually 23 when this recording was done), Boj is already a seasoned professional.
He started as a member of The Osborne Brothers Band on The Grand Ole Opry seven years ago at the age of 17, and Boj is an original member of Bobby Osborne & The Rocky Top X-Press; the band Bobby Osborne formed when Sonny Osborne retired.

Boj has recorded 66 songs as a member of Bobby’s band, playing guitar; acoustic & electric bass; singing the baritone part; and and on 30 of the songs, recording and mixing them as well!!

As impressive as Boj’s credentials already are, I think even more impressive is the amount of study, preparation and dedication to his craft, that is evident on this recording.

Boj is a real student of his father Bobby’s career. I can assure you, no one has studied The Osborne Brothers music like Boj has.
He can tell you anything you want to know about any recording that they ever made; and even tell you about the hundreds of live recordings and TV appearances they did.

Boj has also studied how Bobby picks out and arranges material. Skills that are readily apparent on this recording.
This recording will grab you from the first note (which happens to be a double-stop slide on the fiddle by yours truly).
...
This will go down in history as Boj’s first solo recording.
As you can hear for yourself, he has studied and been influenced by the best ever, and it shows.
His love and respect for his art, show in every aspect of this recording.
It’s a wonderful testament to the enduring quality of the work of Bobby Osborne, The Osborne Brothers, and Bobby Osborne & The Rocky Top X-Press.

As this recording bears witness to:
Boj can sing em’,
Boj can play em’,
he can select them and arrange em’,
he can record them and mix em’, and he knows how to make a great cd from start to finish.

A great recording is more than the sum of it’s parts. It’s more than twelve songs placed in a row.
It creates feelings, moods, entertains you, let’s the singer speak to your heart and tell you a story; and does it all with the drive, the bounce and the energy that only someone who loves this music like Boj does, can do it.
So as you listen to this recording over and over, remember; you’re hearing Boj carrying on a family tradition started in the middle of the Twentieth Century (quite literally, 1949), and taking it where it leads him in the Twenty-First Century.