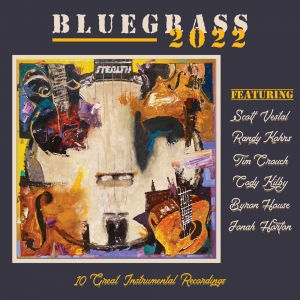 The lead single from Bluegrass 2022 came in the form of “EMD,” written by David Grisman. Since its release in January, it went on to spend several weeks charting on the Bluegrass Today Weekly Airplay Chart. The latest single is the tune, “Welcome To New York.” The hard-driving track was written by Bill Emerson alongside Doyle Lawson, and that inspiration is on full display throughout. Other standouts from the project include a tribute to Bill Monroe, which takes an interesting approach to his song “Gold Rush.” Another album highlight is the closer “Train 45,” which is a traditional cut that will take listeners on a wild ride, in the best way possible.

When the popular series first launched in the mid-90s with Bluegrass ‘95, it was met with high praise, even taking home the coveted IBMA award for “Recorded Event of the Year.” After taking a 19-year hiatus, it was revived in 2020, reigniting the concept of featuring the instrumentalists who are currently doing active sessions with Vestal at his studio Digital Underground, located outside of Nashville. By incorporating these elements, it helps to create a musical experience for listeners that is memorable, while also staying fresh with the latest trends.