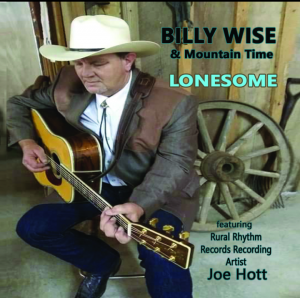 Billy Wise from Nashville, Tennessee has been performing music all his life in clubs and at festivals throughout the Southeast. Known for their excellent live performances, Billy Wise & Mountain Time showcases Billy’s outstanding guitar cross-picking and vocals.

The new CD “Lonesome” includes two songs co-written by Bob Landrigan (Tennessee Bob) and Billy, “Little Church On The Side Of The Road” and an acapella song “Where Eyes Won’t Cry”, and the title cut “Lonesome” by Billy, Joan and Bob. It also features “Out Where The Wildflowers Grow” by Grammy nominated songwriter Rick Lang and “These Ole Mountain Ways” by Jeff Brown of Jeff Brown & Still Lonesome. Rounding out the remaining songs are “Moonshine Man” by CeCe Dubois/Carmen Didier/Judy King, a ballad “When Daddy Played” by Billy and Jackie Paul, “Back Home To Me” by Billy and “Heaven’s Bright Shore” by Billy and Joan. There’s also an instrumental “When The Angels Sing” by Billy where he plays two guitars and bass.

Joining Billy on vocals on the Bill Monroe song “Mothers Only Sleeping” is Rural Rhythm Records recording artist Joe Hott, known for his recent #1 recordings in the Bluegrass Gospel Charts. With the band’s current success of the song “Flyin’ High Like A Butterfly” at radio and Billy and his wife Joan having penned the Ralph Stanley II & the Clinch Mountain Boys recent #1 hit “Beautiful Hills Of Home” (3 times #1 and 42 weeks in the chart) and songs for several other artists, it’s been a good year musically!

The CD recorded at Cowboy Lizard Studio in Nashville, Tennessee was produced by Scott Tutt & Billy Wise and also contains the writer’s version of the song “Beautiful Hills of Home”, with the words just a little different since it’s not being sung about his Dad.

The first single from the Album was “Mothers Only Sleeping” and 120 radio stations played it, with the song going #1 on the Bluegrass Jamboree Chart, and #1 on Mountain Bluegrass with David Pugh for 3 weeks and the #10 Song of the Year 2020.

The second single from the album is the title song, "Lonesome" and it also has gone #1 on the Blue Grass Jamboree Chart, for three weeks and #1 on Mountain Bluegrass for 3 weeks with David Pugh and has 119 stations playing it. Singles are available on Airplay Direct, AirPlayDirect.com/billywiseampmountaintime or from scotttuttmusic@gmail.com

A video of the song "Lonesome" has garnered over 3300 plays on Youtube,Facebook and several TV Networks and has charted as high as #7 in the Bluegrass Standard Video Chart. https://www.youtube.com/watch?v=Rgr2ZMJfyGI&list=RDRgr2ZMJfyGI&start_radio=1

The third single from the album is "Moonshine Man" and it has also gone to #1 for two weeks and the video of the song has reached #14 on the Bluegrass Standard Video Chart and is being aired on numerous TV Networks.

The newest single from the Lonesome album "Little Church On The Side Of The Road" is currently at #2 on the Mountain Bluegrass Gospel Chart.

Billy Wise is featured in the October issue of Bluegrass Standard Magazine (thebluegrassstandard.com) and three times in Bluegrass Today Magazine (bluegrasstoday.com), featuring a review of the new video, “Lonesome”. https://bluegrasstoday.com/lonesome-video-from-billy-wise-mountain-time/

Live shows this year have been very limited due to covid, but the band has just re-started performing.Look for them to be performing at your favorite bluegrass venues and festivals in the near future.