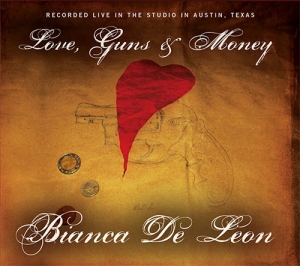 
BIANCA De LEON www.biancadeleon.com
"Hooray for Bianca! A voice from Texas that does it right.- Guy Clark
Love, Guns & Money (Lonesome Highway 3333)
Her fourth album features a photo of her standing in front of a Dutch club’s chalkboard that reads ‘de Texaanse Troubadour Bianca DeLeon.’…. she’s much better known in Europe than in Texas.
….DeLeon is rooted in and lives in two different worlds, the Texas-Mexico borderlands in which she was born and raised, and which, in my experience, few Anglos seem to be able to write about convincingly, and the national and international singer-songwriter venue circuit…. she’s a bit different from your average troubadour. How many of them could write “I Sang Patsy Cline (“the Night Noriega Fell’)?

As always, DeLeon travels first class, with backing by guitar great John Inmon, Radoslav Lorkovic on piano, B3 and accordion, The East Side Flash resophonic guitar, David Carroll bass and Paul Pearcy drums, on a set that includes a song in Spanish, “Buscando Por Ti”, a honky tonker, “The Bottle’s On The Table”, striking observations on love and loss, “Independence Day”, “This Time” and “Silence Speaks Louder Than Words” and ends with a medley of Townes Van Zandt’s “Nothin”’ and Hank Williams’ “Ramblin’ Man”. --- 3rd Coast Music –John Conquest