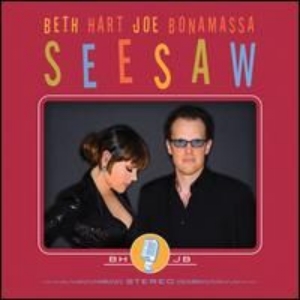 The one-two punch of Hart’s powerhouse vocals and Bonamassa’s scorching solos both honors and reinvents the original recordings. They are backed by the same world class band that kept the grooves going on Don’t Explain: Anton Fig (drums, percussion), Carmine Rojas (bass), Blondie Chaplin (rhythm guitar, backing vocals and percussion), Arlan Schierbaum (organ, piano). This time out, their mighty sound is augmented by a horn section, with Lee Thornburg on trumpets and trombones, and Ron Dziubla on saxophones.

For Hart and Bonamassa, making music together grew out of the friendship and mutual artistic appreciation they developed after crossing paths on the road numerous times, particularly on the festival circuit in Europe. Bonamassa wanted to do a project with her, and came up with the idea for a soul covers record. Shirley, who’s produced 12 of Bonamassa’s albums, was enthusiastic, and Bonamassa contacted Hart. “When I got the call that he wanted to do a soul record with me, I figured I’d be the background singer. He said ‘no, you’re singing lead.’” The chemistry clicked, and Don’t Explain was released in 2011, followed now by 2013’s Seesaw—in between, both Hart and Bonamassa have toured, recorded solo albums, and reached new career highs.

“What’s so cool about these projects is that when Joe and Beth enter the studio, he comes in as a guitar player, and she comes in as a singer,” says Shirley. “They’re getting together just to play fun music, sing some favorite songs, without the pressure of career issues they might have on solo projects. The point is to pick up and celebrate songs that didn’t get their due in the day, and to pay homage to ones that were truly classics. The vibe this time is more upbeat than on Don’t Explain, lots of big band horns.”

Fittingly, Seesaw opens with a joyous horn reveille to kick off “Them There Eyes,” first a hit for Billie Holiday in 1939. Hart’s version is flirtatious and sophisticated—“I love the bubbliness. It’s sexy, it’s fun, and has a great swing to it. That way old school era of American music really turns me on.” The classic American songbook is tapped for other cuts on Seesaw, including the closing number, “Strange Fruit,” which strikes the album’s most serious note, addressing racism, slavery, and lynching. “Billie Holiday and Nina Simone both did great recordings, but Nina’s is the one that Kevin had me listen to,” says Hart. “I don’t have any personal relationship to slavery in my family, but I can at least sing it from a place of compassion. It was important to me to do this.”

Also from that era are a pair of songs recorded by Hart’s idol Etta James, who passed away in 2012. Hart found “Rhymes,” the lesser known of the two, while combing through her huge collection of LPs by Etta. “I loved the low end singing, the back end stuff. It has attitude, but there’s also an innocence to the attitude, and a wonderful groove,” she says. The second, “A Sunday Kind of Love,” is a beloved standard, and Hart’s gorgeous interpretation more than does it justice. “This song was a big one for my mother,” she says. “I was thinking about Etta, and about my mom, knowing that she would love it, and that it would mean something special to her.”

The album jumps ahead chronologically for Hart’s burning rendition of Donnie Hathaway’s 1972 single “I’ll Love You More Than You’ll Ever Know,” with an outrageous solo from Bonamassa that Shirley says “takes the song home.” Of similar vintage is Don Covay and Steve Cropper’s composition “See Saw” from Aretha Franklin’s 1968 LP Aretha Now. “This is another one with attitude,” says Hart. “It’s really high up in the range. I asked Kevin to take it down a whole step. He said, ‘No, you can do it.’ I loved the energy of the song.” Shirley chose it for the title track—“I felt it summed up the balancing act between Joe and Beth, the give and take, as well as the emotional ups and downs, light and shade, of the album.”

On “Nutbush City Limits,” first released in 1973, Hart wails with an intensity that would make Tina Turner proud. “Kevin sprung it on me the last day of recording. I remembered that in What’s Love Got To Do With It, Ike is being abusive to Tina, telling her to sing it like a man, to sing it hard. I adore Tina, and this was a big challenge. It ended up feeling incredible to sing, and the band killed it.” Equally fierce is Hart’s vocal—and Bonamassa’s blistering solo—on “Miss Lady,” the Buddy Miles song originally produced by Jimi Hendrix. “Kevin played it for me when we did Don’t Explain, and I didn’t want to do it. He suggested it again this time, and I still didn’t want to do it. It wasn’t that I didn’t think it was a great song, it was just so vocally demanding,” she says. “At the end of a long day, he said, ‘Let’s do a quick pass.’ My throat was so tired, I just screamed it out, and he kept it. It was a nice surprise.”

A trio of songs are more contemporary. Hart delivers a rocking version of “Can’t Let Go,” from Lucinda Williams’ Grammy-winning 1998 album Car Wheels On A Gravel Road. “I love the southern appeal of this one—playing out of a little sugar shack, and singing that song about your man walking away from you. It’s a classic,” says Hart. “Close To My Fire,” a 2011 track from Slackwax, didn’t click with Hart at first— “I was intimidated because the woman who sang it with Slackwax just nailed it, and I had to find my own way of getting it right. But I felt like I ended up having nice timing on the song, and the band played amazing.” The most recent song on Seesaw is “If I Tell You I Love You,” from Melody Gardot’s 2012 album The Absence. “Her voice and her songwriting are incredible,” says Hart,” It feels so good to sing this, it just rolls off the tongue. The lyrics, the melody, the vibe are great.” Hart’s vocal is soulful, sexy, and jazzy, and Bonamassa’s solo is a highlight.

As she did with Don’t Explain, Hart prepared for the making of Seesaw by listening to the material over and over, absorbing it as fully as possible. That dedication, Hart’s passion, and her chemistry with Bonamassa and the band, defines every song on the album, whatever the vintage.
58
What's This
Advertisement