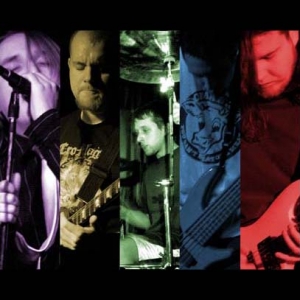 "We All Fall" is the debut EP release by Omaha rockers Beta-Minus. The band is a sort of supergroup of veteran musicians to the Omaha music scene, as the group was spawned by ex-members of eye-catching acts Downshift, Emphatic, Captain Blackjack & Indrid Cold.

Beta-Minus takes a modern hard rock approach to progressive song-writing while dabbing a little into an alternative metal sound. Take the compassion and emotion of "A Perfect Circle", the madness of "The Mars Volta", the head-bobbing groove of "Threat Signal" with the complexity and mood of "King Crimson" and you will have a basic idea of what Beta-Minus is all about; these are the major influences to this band's original style and unique sound.

Beta-Minus began the groundwork of experimenting and demoing ideas as early as December 2006. The momentum started to pick up and was only a year later that Beta-Minus was regularly practicing and developing a solid set of songs. The recording of "We All Fall" began in April 2008. The band wanted to capture this fresh sound and jump head-first into the local music market.

The "We All Fall" EP was recently described by lead singer Dave Evans to the Omaha City Weekly as "songs written about a world if robots took over". Steve Linnell, back-up vocalist and lead guitarist, elaborates on this concept, describing it as "a metaphorical think-piece about our creations looking back at us as their creators. This music represents that disgust, admiration and horrors they might feel."
4
What's This
Advertisement