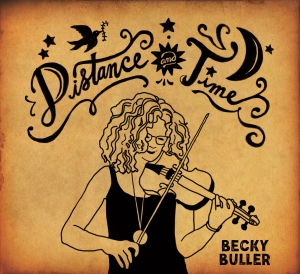 Becky Buller is a ten-time International Bluegrass Association award-winning Bluegrass artist. She made history by being the first artist ever to win in both instrumental and vocal categories, as well as being the first female to ever win Fiddle Player of the Year.

Becky’s songs preceded her own prominence as an artist. The fiery-haired fiddler has had cuts from other artists, such as Ricky Skaggs, Rhonda Vincent, Doyle Lawson & Quicksilver, Josh Williams, Russell Moore & IIIrd Tyme Out, and Special Consensus. Becky cowrote “Freedom,” the lead-off track of the Infamous Stringdusters’s 2018 Grammy award-winning album, as well as “The Shaker,” featured on The Travelin’ McCoury’s self-titled album that brought home the 2019 Best Bluegrass Album Grammy award. She penned the title cut of Special Consensus’s album Scratch Gravel Road, which was nominated for the 2013 Best Bluegrass Album Grammy. Now, as the leader of her own band, Becky’s audiences are connecting the composer with her compositions… to the tune of seven IBMA awards in the last four years.

In 2018, Becky moonlighted with the all-female supergroup, The First Ladies of Bluegrass, which includes all the first women to win in their respective categories at the IBMA awards. The group took home the 2018 IBMA Recorded Event of the Year award for their work on “Swept Away,” recorded on Missy Raines’s solo album, Royal Traveller. The group has also been recognized recently at the Country Music Hall of Fame with their own exhibit.

Becky was destined to be in music. Growing up in Minnesota, Becky played fiddle with her parents and Gordy and Roxy Shultz in the group Prairie Grass. She studied classical violin with both Patti Tryhus and Charles Gray and participated in the Mankato Area Symphony and the Minnesota All-State Orchestra while in high school. Becky’s heart, however, has always been that of a fiddler. She won the junior division of the 1996 Minnesota State Old Time Fiddle Championship in Cotton, MN. Becky went on to college to study public relations at East Tennessee State University, where she performed with several different bluegrass ensembles, including the school’s prestigious Bluegrass Pride Band, with whom she performed in throughout France and at the Kennedy Center.

With over twenty years experience as a music educator, becky is very passionate about passing the music on, teaching at several camps and workshops throughout the year, in addition to her busy performance schedule. Becky is also very active in the bluegrass music business community, currently serving on the IBMA Foundation board. She was on the IBMA Board of directors from 2013-2017 and did a three-year term as chair of the IBMA Songwriter Committee from 2013-2016. She is a Leadership Bluegrass alumna, class of 2003.

While thumbing through my songwriting notebooks, I ran across a photocopy of the card Val found that inspired this song. The picture on the front is of a girl walking through the woods with a pack on her back, decisively heading down a path labeled “Your Life”, having turned her back on “No Longer An Option”.

Eric and I tossed this song back and forth via email and text for several years. A whole lot of life got in our way, but we finally got this written up to our liking.

For Gene Boyd of Bristol, Va., Mr. Billy Womack of Woodbury, Tenn., and the anonymous fiddling barber whose story was shared with me at Dollywood so many years ago. Through their music, they have attained immortality. So grateful to all the incredible fiddlers and singers who joined us on this cut.

Jeff brought this idea to our writing session that day. Always an honor to write with these two masters. Ronnie’s is one of my favorite voices in all of bluegrass music.

Crissi Mosselman, a German singer/songwriter and filmmaker, was producing a travelogue of his musical adventures across America during the summer of 2011. I met up with him in Bell Buckle, Tenn. We talked on camera about songwriting; I invited him to help me finish this one while we were at it. Find out more about the film at: countryroad-film.com.

Jon and I have been working together for years and have a successful track record of cuts by other artists. This is the first time I’ve recorded one of our co-writes and it just cried out for The Fairfield Four. It has been one of the greatest joys of my life to get to share the Gospel in song with them.

Songwriting has always been a source of therapy for me; I was working through a broken heart with this one. Big thanks to Melonie for adding her lovely harmony to this track.

These guys are so talented! Had a great time writing this twisted tune with Ned. It’s named for the road signs at the end of his street.

This is the first song Mark and I ever wrote together way back in 2003 or so. He brought an Old Testament perspective to the session that day; I brought the New. The Isaacs’ harmonies are heavenly. So fun working with Chris Brown and his drums of renown.

For Romy. I’ve been kicking around this chorus since college, but couldn’t come up with verses that satisfied me until I began drawing on some of my own real-life, completely bizarre dream sequences. (Sometimes you just can’t make stuff up!) Big thanks to Sierra Hull for encouraging me to record this one.

I relate to this song more every day. This was my first experience writing with Donna; she’s a machine! The band totally blistered this.

After soaking up all the love for Joni Mitchell at the 2019 Newport Folk Festival, I started digging back into her music and thought this would be fun to try with the old-timey banjo. Had a grand time in studio with Uncle Flux!

Sydney Horton brought this song to me so I could teach it to her. I just fell in love with it! “Blessed are the peacemakers…” (Matt. 5:9)


Produced and engineered by Stephen Mougin for Dark Shadow Recording

On this album, Becky played “Leopold”, a circa 1800 German Steiner model fiddle (aka “The Old Man”); “Walt”, a circa 1940s Japanese made octave violin (her Grandpa Buller’s fiddle); a Garner Wilson bow; and a DP Hopkins Becky Buller signature model clawhammer banjo.

This album is dedicated to the memory of my father-in-law, Sterling Haley, and my dear friend Marjorie Jenkins.