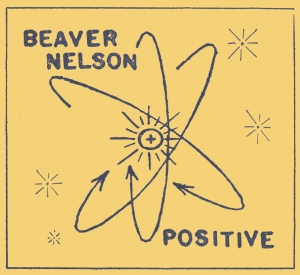 Thoughtful, philosophical singer/songwriter Beaver Nelson has long sought to locate deeper truths, to shape order from the puzzles life puts forward, both past and present. He explained to Rolling Stone: "I'm pretty obsessed with the notion of time," he says. "It's the basic human problem. What time means and its effect on us and the fact that you can't own it. It's here, then it's gone—you screw up and you don't get it back.” On his new album Positive, Nelson continues to reflect in a collection of songs written over the span of his career, brimming with intelligence, humor and his trademark pop hooks. Produced by his longtime cohort, Scrappy Jud Newcomb (Patty Griffin, Slaid Cleaves, Ian McLagan’s Bump Band) in Marfa and Austin, there are new songs (“Positive”, “It Ain’t Yours”) and some written as early as ’94 (“Willing and Able”) and ’95 (“Bad Movie”).
Hailed as a prodigy by Rolling Stone at the tender age of 19, Beaver has released 7 albums since then, but not before getting churned through the major label blender first. By the age of 22 he had two failed record deals and had seen enough of that world to back away. He fronted a rock band for years before returning to solo performance and focusing on songwriting in the wake of the passing of his idol, Townes Van Zandt.
Nelson began playing guitar at 14 and was introduced to Bob Dylan, the Rolling Stones, Lou Reed and Bruce Springsteen by two of his camp counselors. He began to write and record songs, assembling handmade cassettes to sell to friends. He began exploring the Austin open mic scene during high school, driving up from his home in Houston. The vibrant and ultra-supportive scene introduced him to Jimmy La Fave, Jo Carol Pierce and others as well as Troy Campbell and Scrappy Jud Newcomb, members of the great Austin rock band Loose Diamonds.
By the early 90s he was touring and beginning the frustrating major label period in his life, with deals that fell through and a shelved album that did not sound “grunge” enough for the A&R flacks. By the time he signed with Austin-based Freedom Records and released his debut, he had emerged as one of “the most promising writers of the entire decade,” according to AllMusic.com. His music has been feted in Rolling Stone, Texas Monthly, Mojo and No Depression, among many others.
Austin Based Singer/Songwriter Beaver Nelson Announces New Album "Positive" Out August 22nd

“I’m pretty obsessed with the notion of time" Beaver Nelson once told Rolling Stone magazine. Quite a bit of time has passed since that conversation and during that period much has happened. A lot of recordings, a family, a business and many, many songs. Chances are if you know Beaver’s name, you probably connect it with songwriting. He’s been writing songs and releasing them for the last twenty five years. His latest album is Positive and if you are one of those people who has heard Beaver’s name over the years and wondered why, this is perhaps the collection of songs you should start with. It’s a summation without being nostalgic, it’s stylistically varied without being forced and it’s as current as last week as well as having one foot in those hazy and glorious days of the last millennium known as Austin’s roots rock scene.

On this new album Positive, Nelson continues the journey with a collection of songs written over the span of his career, brimming with intelligence, humor and his trademark pop hooks. Produced by his longtime cohort, Scrappy Jud Newcomb (Patty Griffin, Slaid Cleaves, Ian McLagan’s Bump Band) in Marfa and Austin, there are new songs (“Positive”, “It Ain’t Yours”) and some written in those early days (“Willing and Able”) and (“Bad Movie”).

Scrappy and Beaver collaborated with longtime Nelson bandmates Matt Eskey and Mark Patterson, but Nelson reports that production decisions and the like were 100% Newcomb’s. “Scrappy produced my first 3 albums and co-produced the next three. On this album he was totally in charge of interpreting my songs. He kept removing chords and creating more room sonically for things like percussion and background vocals. I’m really proud of the way it turned out.” Other old friends also pitched in, including producer/guitarist Rich Brotherton (Robert Earl Keen, David Halley) who tracked additional music at his Ace Recording and bassist extraordinaire George Reiff (Dixie Chicks, the Jayhawks, Joe Walsh) who also did some additional recording and masterfully mixed the album.

Positive is a sparkling collection, showcasing Beaver’s literate and searching lyrics as well as his unique melodic sensibilities. It opens with the chiming guitars and spare drums of “Well, Well, Well”, a contemplation on his early years with his longtime wife, with Nelson singing “Can we go back a step, where we used to be, I could use some help from history.” “One Tough Love” has an almost hymnal quality, with beautiful back-up singers supporting his soaring tenor vocals. It also shows Beaver’s love of the songwriting of people like Ron Sexsmith and Glenn Tillbrook. The first single, “Willing and Able” is an up-tempo rocker that brings to mind artists like Tom Petty and the Kinks.