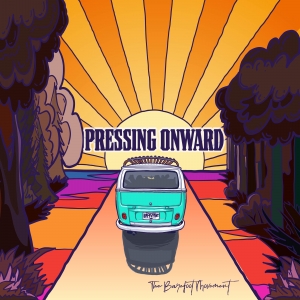 Nashville, Tenn. - The Barefoot Movement is excited to announce that they’re moving full steam ahead with their upcoming album Pressing Onward, which is officially set for release on September 17. The collection includes 10 new recordings which are all produced by powerhouse industry veterans Chuck Plotkin (Springsteen's Born in the USA, Bob Dylan's Shot of Love, etc) and Hank Linderman (The Eagles, Chicago, etc). The lead single “Someday” is out now via Bonfire Music Group.

“A good number of the songs have to do with finding your footing after a challenging period,” the band explains. “Strangely, most of them were written before the pandemic, but they have come to mean so much more after experiencing this crazy time.”

“Someday” is a striking ballad which was penned by Noah Wall, who also sings lead on the track. It places a special emphasis on the group’s tight harmonies which also include members Tommy Norris and Katie Blomarz singing harmony vocals.

Bringing their signature sound that includes an influence of Americana, Bluegrass, Roots, and Rock, the group’s full project showcases their energetic edge. In total, Pressing Onward includes seven original tunes and three covers. In addition to the breathtaking single “Someday,” another standout is the track “It Won’t Matter Anymore” which marks Barefoot Movement bassist Katie Blomarz’s first lead vocal performance on an album for the band. The recording was a perfect fit for the powerhouse singer’s voice and personality, and was actually arranged in the studio, rather than ahead of time like the rest of the collection. Another highlight is a cover of “Fire” - a tune made famous by Rock and Roll Hall of Fame icon Jimi Hendrix when he originally released it in 1967. It’s become a staple with the Tennessee based band’s live shows, which led to the new recording.

As it gets closer to the band’s official release of Pressing Onward, fans can expect a lot more surprises from the award-winning band. With the upcoming video and lead single coming soon, the best way to keep up with all things The Barefoot Movement is by following their journey on Facebook.