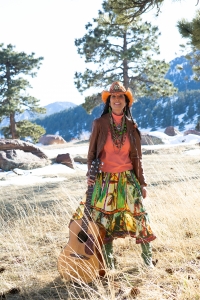 Much is made of music’s power to help people heal and grow. To inspire them to surrender to something more powerful than themselves, setting them on a path toward things they hadn’t thought possible, Barbara Jo Kammer embodies that journey. Driven by a personal mission of service to the elder community, she’s a performer with uncommon range, impeccable taste, and an exciting new songwriting voice. In her music, Barbara Jo fuses her growth as a writer and performer with her journey of recovery from drug and alcohol abuse. The joy and openness she feels in her recovery, and her ability to connect, make music that is already highly personal feel even more so. Upon hearing her sing for the first time, it’s hard not to feel that you’ve heard her before. Her sound is reminiscent of some of the iconic singers of the Folk Revival, but it quickly becomes clear that her musical voice is unquestionably her own.

Her new album, Big Blue Sky in the Morning, available June 1, 2020, finds Barbara Jo leaning into her considerable versatility, putting it on display alongside some of the top musicians in the world of roots music. The title track, her second ever original song, relies only on voices and body percussion to achieve a feeling that is spare, yet deep and rich. It’s a joyous, anthemic work, one that tells the listener that this record has something special in store, and one track at a time it delivers on that promise. Folk, country, classic rock ’n’ roll, cowboy songs, and more, are all here, shining brightly, and with each song Barbara Jo shows that the styles are all well within her command.

Barbara Jo was inspired to make her first record after attending an album release concert by Colorado music legend, KC Groves. The pair teamed-up to work together on Barbara’s Groves-produced debut album, One Song at a Time. It’s no surprise that Big Blue Sky in the Morning finds KC back in the producer’s chair, says KC: “Barbara is one of the most talented vocalists I’ve ever had the pleasure of working with. It is clear Barbara Jo has studied voice, but she also has one of those naturally agile voices, when she opens her mouth it seems like effortless notes were just waiting there, dying to get out into the world.”

Barbara Jo feels a kinship between herself and those who may feel forgotten and left in the cold, and thrives on being able to bring something truly wonderful to an often overlooked community. “I’m so blessed to use the gift I was given as a singer to be of service,” says Barbara Jo. Compelled to connect with and serve elders, Barbara Jo takes her music-making to retirement homes and hospice facilities throughout Colorado’s front range and Wyoming.
7
What's This
Advertisement