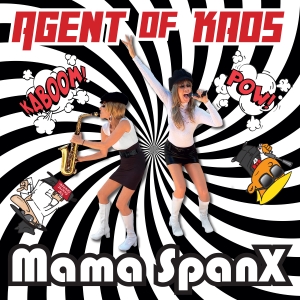 ”Songs rich in texture that cut deep, evocative images and sounds {of) Memphis and New Orleans with every so often a dash of Motown, they deliver old-school funk at its best: hot, emotional, spiritual, bluesy, and joyful. With State of Groove, Mama SpanX brings us a music too often missing from today’s soundscape. POPULAR MUSIC and SOCIETY
”If you’re ready for some old school funk with a twist, Mama SpanX has your “State Of Groove” in good hands!" BIG CITY RHYTHM and BLUES

`STATE of GROOVE' is Mama SpanX first independent release. Recorded in September 2016, in Eagle Rock, Ca. "Old School", Analog on a Neve board. Producers Nikki Armstrong, Ben Beckley and Howie "the Doctor" Lindeman, recorded by Richard Robinson.
Mama SpanX is a multi – member soul/rock/funk group made up of highly experienced and virtuoso musicians from the various musical genres. With strong influences by artists/bands such as Tower of Power, James Brown, Gladys Knight and Ike and Tina Turner the bands musical emphasis is on strong melodies/lyrics and grooves that at the same time highlight and feature the individual players as well as an exciting stage show.
(PRONOUNCED "SPANKS" as in "Mama spanks us!")
Mama SpanX Background:
Leader/singer/songwriter and New York Blues Hall of Fame vocalist Nikki Armstrong, known for her soulful vocals and high energy performances, got the concept while collaborating over several years with Soul/Jazz Guitarist/Producer Melvin Sparks. Melvin, a major influence on the jam band scene, came up with the name "Mama SpanX". After Melvin’s passing in 2011 and then performing all over the eastern seaboard and abroad, Nikki finally began forming the band in 2015.
The first artist to join was Drummer/composer/arranger Ben Beckley. Nikki and Ben had collaborated previously, songwriting and producing in LA before Nikki relocated to New York.
Dixie Frog recording artist/Blues guitarist Steve Johnson and his girlfriend, Latin/Jazz Saxophonist Julie Sax then joined. The couple and Nikki had played together frequently on the New York scene before Steve and Julie relocated to the LA area.
To contribute to the soul and gospel aspects of the band, two prominent fixtures on the LA Blues and R&B scene, Saxophonist Steve Sadd and Keyboard/Organist Harlan Spector became the next assets to the group bringing their chops and versatility.
The search for the ideal bottom end to the group took almost a year. Six string fret-less Bassist, David Abercrombie added the perfect pocket for the band! This 7 pieces team of like-minded musicians forms the main core of Mama SpanX. For Band Bios: Visit Mama SpanX!

" The band takes off with “Rocket” on a steady climb, horns flaring and guitar go into a free fall, but Nikki’s commanding vocals keep it clearly on track. Mama’s soulful storytelling style is shown off as she confesses her “Wild Emotion” then the band rolls out some gritty licks as the hot sax and powerful vocals join forces, you’ll be on your knees and willing to “Crawl” as her lyrics get deep into the ugly reality of “Being Beautiful.”

“With State of Groove and Mama SpanX, Armstrong delivers an album that matches the exuberance, potency, and steam of her live performances. In the fall 2016, Armstrong led a band of seasoned veterans into a Los Angeles studio where, for almost two weeks, the newly christened Mama SpanX churned song after song until they found the right groove for each. The result is State of Groove, 12 tracks, 11 written or co-written by Armstrong and a cover of Lou Donaldson’s “Alligator Boogaloo,” ……and sounds of funk-masters like James Brown, Sly, George Clinton, and Prince, and funk hotspots like Memphis and New Orleans with every so often a dash of Motown. To round off the album, Armstrong delivers three ballads: the jazzy “Black & White,” the bluesy “Wrong Side of the Garden,” and the soulful “Anywhere You Are.” Dr. Tom M. Kitts, Professor of English, St. John’s University, New York, author of Ray Davies: Not Like Everybody Else and the 2016 book release John Fogerty: An American Son.

”Mama SpanX on State of Groove, delivers just what the name promises: it’s sexy. Not show-off, wink-wink sexy, but grown-up sexy, passionate sexy, funk sexy, soul sexy. Nikki makes every note her own, but in track after track I hear bass grooves and horn riffs, sax wails guitar screams, and backup singer croons that go back through Muscle Shoals to 1950’s R&B. “I just wanna fall in love with you,” Nikki sings on one track, and listening to her rough-smooth contralto, I can’t help falling in love with her myself. But, oh, no maybe I’m too late: on another track she sings “I’ve got too many men on my menu!” Much as I love the driving blues tracks, I think my favorite is Anywhere You Are, a meditative, poignant piano jazz ballad that brought tears to my eyes. “All the music in the air demands a change of scene,” Nikki sings on one of the State of Groove pop-inflected tunes. I’m guessing, hell, I am predicting that Mama SpanX’s music will bring a high-rising change of scene to Nikki Armstrong that will bust New Jersey’s favorite daughter up and out into the Tina Turner, Janis Joplin, Bonnie Raitt big time. Go, Mama SpanX, go!! Michael Lydon is a founding editor of Rolling Stone and author of Ray Charles: Man and Music - a biography of the Genius.” SEE FULL REVIEWS: Mama SpanX Press!