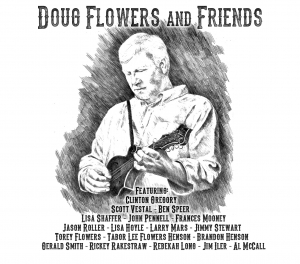 Bluegrass Unlimited Review July 2015
DOUG FLOWERS AND FRIENDS
Melody RoundupNo Number
Doug Flowers is a bluegrass veteran who has played with and befriended many in our industry over the years. He’s performed with Little Roy Lewis and Lizzy Long and has been providing some excellent mandolin playing and harmony vocals with Clinton Gregory’s recent bluegrass resurrection.
On this new album, he calls in favors and acquaintances to make a very good album of straight-ahead bluegrass. With a title that includes the phrase “And Friends,” the list of collaborators is long and includes Gregory, banjo master Scott Vestal, gospel buddy Ben Speer, Lisa Shaffer, John Pennell, Francis Mooney, Jason Roller, Lisa Hoyle, Larry Mars, Jimmy Stewart, Torey Flowers, Tabor Lee Flowers Henson, Brandon Henson, Gerald Smith, Rickey Rakestraw, Rebekah Long, Jim Iler, and Al McCall.
What’s cool about this project is that even though some of the names listed above might not be familiar, their musicianship makes for a solid album of music. Another thing impressive about the project is that Gregory, Vestal, and Flowers co-produced it and were all on the same page as each artist is utilized wonderfully. There are seven cuts written or co-written by Flowers, the highlights being the traditional bluegrass romp “All Over Me,” the country/bluesy lead vocals of Gregory on “When The Morning Comes,” and the Stanley Brothers-influenced “Where The Sun Never Shines.” One standout song is “Beautiful One” featuring Tabor Henson on lead vocals, sweetly blended harmony vocals by Flowers and Brandon Henson and Gregory on fiddle. Flowers also gives tribute to the first generation with a rockin’ version of Carter Stanley’s “Ridin’ That Midnight Train,” Johnny Bond’s “I Wonder Where You Are Tonight,” and two Bill Monroe numbers: “Rawhide” and “I Hear A Sweet Voice Calling.” (Doug Flowers, P.O. Box 896, Hephzibah, GA 30815, www.dougflowersmusic.com.)DH

After three decades spent playing with regionally-based artists, and stints with the Little Roy and Lizzy Show and the Clinton Gregory Band, Georgia-based mandolin player Doug Flowers has recently released Doug Flowers and Friends, filled with a number of his own original compositions alongside bluegrass classics.

Flowers has called upon many of his musician friends, including former bandmate Gregory, Frances Mooney, Rebekah Long, and banjo master Scott Vestal (who also produced and engineered the project), among several others. The result is a solid, traditionally-based effort.

Flowers, whose songs have been recorded by artists like Ronnie Bowman, Valerie Smith, and Little Roy and Lizzy, wrote or co-wrote half of the album’s tracks. Things kick off with All Over Me, an upbeat, straightforward, modern traditional tale of a man who learns of his wife’s cheating ways written by Flowers and Gerald Smith. The chorus includes a bit of clever wordplay as the singer sees his wife with another man: “She was all over me, by the way she was all over him.”

Flowers and Smith collaborated with Gregory on Run Willie Run, which tells about a fictionalized version of one of Gregory’s fiddle-playing, moonshining ancestors. It’s cut from the same cloth as a number of other recent moonshiner songs, with the added twist of the song’s main character teasing lawmen by playing his fiddle while they were hunting for his stills.

Flowers wrote Lisa Lee with Jim Iler, who also plays guitar on this track and several others throughout the album. The song, a hopeful number about cautiously falling in love, was written close to thirty years ago, when Flowers was dating the “Lisa Lee” of the song’s title. He shares in the liner notes that they’ve now been married for twenty-six years.

Born Again, another Flowers/Smith co-write, is a cheerful song that mixes Gospel themes with the ever-popular bluegrass love of home: “I was born down in Georgia, and it’s still sweet home to me, but I was born again up in Tennessee.”

Of the covers on the album, Beautiful One is probably the standout. It’s a contemporary Christian song that’s been recorded by a number of artists in that genre, but Flowers has reworked it into an excellent contemporary bluegrass Gospel song. This track was a family effort, with wonderful lead vocals from Flowers’ daughter Tabor Henson and a strong rhythm section from son-in-law Brandon Henson on guitar, and son Torey Flowers on bass. If Flowers happens to be looking for a different direction to point his next album, this song could certainly be a good jumping off place.

Other highlights are the classic country-leaning cut of Making Plans, with fine harmonies from Iler (lead), Flowers (baritone), and Vestal (low tenor), and a faithful version of Carter Stanley’s Ridin’ That Midnight Train.

Though Vestal’s banjo playing normally wouldn’t be compared to Ralph Stanley’s, he tackles the Stanley style with ease here. The album closes with a chance for Flowers to show off some hot mandolin picking on Rawhide, a song, according to the liner notes, that earned him a new F-style mandolin from his dad when he learned to play it in his youth.

Though Doug Flowers and Friends utilizes a number of musicians throughout the project, it still has a unified feel, thanks to the traditional-leaning sound running throughout the album. Flowers proves himself a triple threat here, offering strong vocals, picking, and songwriting.

Since the release of this album, he has begun booking shows as The Doug Flowers Band. More information about the album and the new group can be found at www.dougflowersmusic.com.
review written by:
John Curtis Goad
John Goad is a graduate of the East Tennessee State University Bluegrass, Old Time & Country Music program, and is now pursuing a Masters degree in Appalachian Studies at ETSU.

worldwidebluegrass
" Just an FYI...your entire project is heavily rotated in our 24/7 stream. We used every cut...that is a rarity! Excellence in Bluegrass Music...we felt it was amazing!"
Gracie Muldoon Davis

Doug Flowers & Friends New Release
This project has been mentioned in Bluegrass Unlimited magazine and is receiving accolades in the music industry for the diversity and quality of the songs and singers. The CD is receiving heavy airplay already in the US and is now being featured in Germany and Australia as well.