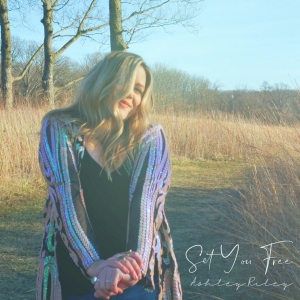 Americana singer-songwriter Ashley Riley to release new single, “Close to Me,” on August 28th
Decatur, IL-based Americana singer-songwriter Ashley Riley is set to release her latest single, “Close to Me,” on August 28, 2020. “Close to Me” won the Midwest Music Expo Listening Panel in May 2020, and after many requests from fans that she release it, Riley decided it was high time to officially put the song out into the universe.

“This year, as we all can attest, has been sad and strange and full of challenges,” says Riley. “We’ve all had to adjust and figure out how to keep moving forward, what can take a backseat, and what we can let go of altogether. I really wanted to put out something that feels good and ‘Close to Me’ is that song for me. It’s got a nice groove to it, although it does make me laugh that I’m releasing a song entitled ‘Close to Me’ when we all are supposed to stay at least six feet apart.”

The vocals on “Close to Me” were from a quick demo take that was recorded the first day in the studio. Says Riley about the recording session: “I remember it well because, right before that, I sang for three hours at a luncheon for the American Heart Association and I got to meet Jennie Garth from ‘Beverly Hills 90210’ who was the speaker at the event.”

Her sound is laced with earthy grit, and at its core, Riley’s music is best described as sophisticated indie/Americana. There’s a dreamy quality to the songs, yet lyrically they capture the essence of the more honest moments of our days: those seemingly ordinary moments that suddenly take your breath away or make you weak in the knees, those moments that prove to us that oftentimes the most extraordinary moments are found in our everyday lives. Riley has been slowly chipping away at her upcoming album, taking a slightly different approach. “Close to Me” is the first single from the album; Riley is still working on it and plans to release the as-yet-unnamed album in early 2021.

After her EP release in 2017 (Can’t Let You Go), half of her band moved away, and Riley returned to her acoustic songwriting roots. “I went back into my own little shell of singer-songwriter-ness, and I started enjoying that space again,” says Riley. “After a while I wanted to capture some of the songs, and I felt like I had an opportunity for it to be a blank slate again.” She reached out to James Treichler at Wave Upon Wave in Champaign, IL and headed into the studio with him in early 2019. Since then, Riley has been working with Treichler and dialing in the sound for the upcoming album. “It’s been an interesting process, really digging in and choosing the palette for each song,” Riley says. “I didn’t realize how heavily I relied on different players in my previous band to help pull out the sound, and it’s been really fun to step into that role more fully myself.”

New Noise Magazine called her “one of the best obscure female artists I’ve heard in, well, ever,” and In-Forty.com declared her a “female songstress everyone would be wise to spend time with.” Women of Substance Radio noted: “Ashley’s songs have an ethereal and delicate quality… Her reverence for Americana artists like Neil Young and Patty Griffin is unmistakable. She pens lyrics that are unsettling and sometimes even disturbing, as all good lyrics should be.” Illinois Entertainer trumpeted: “Make no mistake, Ashley Riley has an utterly gorgeous voice and a sound all her own.” Seven of the nine songs on her third album, All The Pretty Things, can be heard in rotation on Starbucks in-store airplay.

Past Press Praise for Ashley Riley

“The instant you first hear Ashley Riley’s intoxicatingly sweet vocals and catch the tinge of a delicate warble that colors her tone, you are drawn to them just as you would be attracted to any object of beauty. However, it’s the slight traces of earthy grit around the edges offering shades of intrigue that ultimately pull you in deeply and rivet your attention. On her latest offering, All The Pretty Things, the sparse arrangements allow her voice to effortlessly hold sway over the music and the result is an intensely captivating album of intimate expressions.” - AXS.com
“All The Pretty Things is engaging stuff, both rootsy and soft, as Riley provokes with complicated, though gently offered, lines.  ...Those who enjoy complex singer-songwriters will find Riley's distinct voice rewarding.” - Knoxville News-Sentinel
“Ashley’s album is... a gorgeous collection of nine beautifully crafted songs that encompasses all that is valued in the folk/rock/acoustic scene. Added to her exquisite vocals, Ashley shows she’s no mean song writer in both lyrical content and melody construction. ...Straight from the acoustic opener ‘Made of Dreams’ through to the tranquil closer ‘Lie To Me’, where Ashley shows she’s the master of the slow song, Americana fans will drool over the enchanting quality.” - Three Chords and the Truth
“With a voice and style somewhere between Jewel and Martina McBride, Riley sings wistfully and invites us into the soft world she has created.” - Innocent Words Magazine


It has been said that Americana music is more a state of mind than a definable art form. Likewise a host of superlatives and assorted literary devices only scratch the surface of the impact from listening intently to the new album by Ashley Riley. The thirteen songs that comprise THROUGH THE THIN are strikingly impressive in how they generate a mixture of moods and ambience, with the stark effect of initiating constant repeat listens. In essence this is an expertly curated album, driven by a controlled and well-judged guitar presence merging splendidly with Ashley’s hazy vocals. It’s a substantial release, weighing in at over three quarters of an hour, which gathers momentum from the early stages and packs a core punch with some sublime melodic tunes.

The connection with Ashley’s music is a mere product of the digital age which enables a relatively low key indie performer from Decatur Illinois to resonate with a UK blogger. Two years ago, her album ALL THE PRETTY THINGS was literally stumbled upon with a grateful ending and this follow up has been wired down a similar route with an effect that shows a significant upgrade. This is once again a self-driven project working closely with bass player Matt Comerford. The pair was joined by Tyler Bundy (lead guitar) and Ian Grindstaff (drums) in the studio and collectively they have done a superb job in getting the tracks primed for release in early April.

Fans of sophisticated and smooth indie/Americana music will have little problem connecting with the album and it will also comfortably sit in the contemporary roots rock field. There is a minimalist hint of twang to **** in alt-country circles and shades of folk rock in the lyrical side to the output. The core of the album which makes the overall record come on leaps and bounds is a quartet of tracks to drool over. The fabulous song structure of ‘This Town’ rattles your senses before leading into the stand-out track ‘See You Around’. This song has been around for a while and almost bridges the gap between the last two albums. A video is available to share the song with the wider online community and it rolls out as a heartfelt (but somewhat distant) interaction with the memorable line ‘we could talk about your family or the baby on my hip’. ‘Potion’ sees the hint of twang decorating another inspiring song and ‘Misery’ completes this mid-album sequence with the full band in increased rock ‘n’ roll mode.

Either side of this album defining segment, there is no shortage of high spots. ‘Times’ kicks things off in a low key but essential building mood and implicitly leads into ‘Out to Sea’ which contains some serious guitar work. ‘Days Like This’ rolls out as track #3 with the mood and temperate atmosphere being securely set. By the time the album’s lengthy finale takes the home turn, the listener is entirely under the spell of Ashley and her band. The gorgeous ‘Stay’ shines in this part of the record and provides a warm glow to what can be described as a kinaesthetic album in how it touches you.

THROUGH THE THIN is a hugely impressive contemplative album, pensive in places and wholly seductive in its presence. The pace and the balance are finely tuned with its long lasting appeal a secure lock in. While circumstance will no doubt retain the distance between Decatur Illinois and the West Midlands gig scene, there is gratitude that the music of Ashley Riley found its way across the wires to a distant land. This album will be enjoyed on many more listens and it warrants Ashley enhanced success.