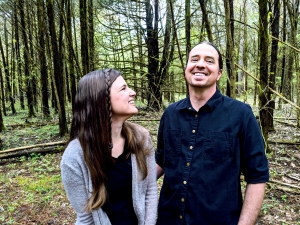 In 2008 solo artists Bryson VanCleve and Jill Marie met while performing at The Room 5 Lounge in Los Angeles, California. The friendship quickly blossomed into a relationship, and they began writing and recording music together. Bryson, an L.A. transplant originally from Arkansas, and California native Jill Marie, decided to get married and leave the city for a life on the road. The two troubadours formed Troubaduo, and booked shows all over the United States. They lived on the road 2009-2011 where they completed seven U.S. tours.

In April 2011, they found out Jill was pregnant, but continued through two more tours. On the way home from their seventh tour, their son Jedidiah was born three weeks early and Bryson delivered him on the road, in their touring RV known as "The Sea Turtle". (On their son's birth certificate it literally states that Jedidiah was born in the "Sea Turtle RV").

After Jedidiah was born, Bryson and Jill settled down in central Arkansas. Several years passed, and they developed interest in vegetable farming as a possible means for income. They decided to move to Western Arkansas in 2016, where they helped start a family farm growing chemical free produce for a living. During their years of farming for a living they soon found out the meaning of hard work, and less than minimum wage pay. 60-80 hours a week of physical labor, eventually resulted in an irregular heartbeat for Bryson due to low potassium levels. The growing pains with extreme manual labor and numerous crop failures after crop failures resulted in motivation to do music for a living again. However, this time it would be different. The life lessons and experiences from hard work and country living, would result in seasoned songs that most people could appreciate and relate to.

In the Summer of 2018 Troubaduo set out to work on the release of their first country album, entitled "Songs of Hope". The sound compares to new country music artists such as Chris and Morganne Stapleton, to vintage artists like Johnny and June Carter Cash, Patsy Cline and Willie Nelson.

Troubaduo continues to perform, write, record and share their music, as their songs keep to moving across the globe distributing a Message of Peace, Love and Hope.

Join this Husband-Wife Music Duo, Hybrid-Homesteaders, Farmers and Parents on their Journey at: www.youtube.com/troubaduo