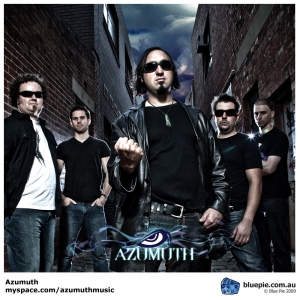 Azumuth is an alternative hard rock band from Melbourne, Australia that was formed in 2007 by New Zealand singer/songwriter Aidan Dickens. Having spent 5 years with his previous band, Aidan decided it was time to move on, and in 2006 made the move to Melbourne.

Aidan recorded and produced Azumuth’s self-titled debut album which was released in 2008. At the completion of the album, Aidan enlisted the members he needed for Azumuth to take to the stage. The band comprises keyboardist Adam Rieck, bassist Adverse e fex, drummer Genie, and guitarist Nathan Young.

Signing with Bluepie records in early 2009, Azumuth is now gearing up to take their music to the masses with brand new material from the upcoming Fly EP and Illuminus album. The album features a diverse set of musical styles, structures and dynamics, largely attributed to Aidan’s variety of influences. While many tracks feature pounding rhythms and bass work, chunky guitar riffs and soaring vocals, some slow the tempo down and incorporate lush strings, acoustic guitars and emotionally-driven vocals.

With Bluepie records onboard, a consolidated line-up and the upcoming release of Illuminus, it is a very exciting time for Azumuth. So stay tuned, and keep up-to-date with all things Azumuth by joining the newsletter. The journey has just begun!