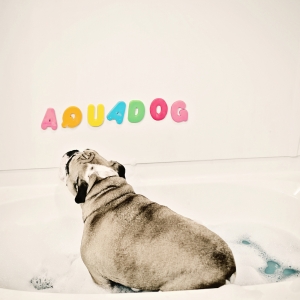 Little did Adam Manoucheri realize at the time that this accidental slip of the tongue would become very important…much more than just a story to laugh about… That night during a gig with his then-current band the Manoucheri Trio, the name was born for the AquaDog project.

Fast forward to the present, and we now have the release and realization of that project. AquaDog is, quite simply, Adam in every respect—easily understood, since he played every instrument and sang every vocal on the album. This album is a culmination of his influences, giving a nod to “classic” rock with memorable guitar-based riffs and strong melodies, balanced with a singer/songwriter acoustic side—all while retaining its own identity.

"For just one man, this is a seriously impressive piece of work – Adam has managed to make himself sound like a synchronised and established group, which is no mean feat. The music is, broadly, southern-rock in feel, indeed tracks like “So Called News” and “What Can I Do” (in particular) had me in mind of the likes of Lynyrd Skynyrd and the heavier end of The Doobie Brothers – not that the songs are in any way derivative, but the feel is similar. You can certainly hear Adam’s love and knowledge of music, it bursts through the speakers on listening to this album."

"It's been a long long time friends, since I've heard a straight ahead rock-'n'-roll album of this caliber" ... "Great musicianship, super cool name, great cd artwork, and originality. AquaDog has all that going for it and more."

"Take a listen, and the first takeaway will almost certainly be Manoucheri’s precise guitar work."

The mastermind of AquaDog is Adam Manoucheri, a veteran multi-instrumentalist from Northeast Nebraska. As he was once told by an Austin, TX guitar legend, “Great players come out of really flat, boring places…we had nothing else to do, so we did nothing but practice!” Starting out on guitar at the age of 10, he immediately took to the instrument…though as the years went by he started adding piano and (with some quick talking to cringing parents) the drums. By the age of 13 he was making appearances with his brother Dave’s band, and by high school was a part of his new band, The Nine O’Clock Blues Band. After recording their first album, Time Frames, a departure from strictly blues saw a name change to Manoucheri. As Manoucheri they released an album, The Blind Leading the Blind, which featured Adam taking on the additional role of bass player as well as drums on several of the tracks. They continued as Manoucheri until Dave moved outstate, after which they more or less disbanded.

It was at this point Adam reconnected with the band Loco, a fixture of northeast Nebraska in countless forms through the years. It was here that he was again in a band with longtime friend and drummer George Marshall…and after Loco disbanded, the Manoucheri Trio was formed, with Adam (guitar/vocals), George (drums/vocals) and Orv Morrow (bass/vocals). The Trio was in existence until Marshall’s untimely death in the fall of 2013…much like Zeppelin, etc, there was no “replacing” George Marshall, and the Manoucheri Trio was disbanded with his passing.

Regrouping after the loss of his friend and bandmate, the unnamed project that Adam was working on was coined AquaDog, in reference to the story from that gig years prior. Collaborating again with friend and co-producer Doug Van Sloun (of Focus Mastering, Omaha, NE), they worked hard to engineer an album with not only great guitar tone, but great sounds all the way around to complement the songwriting. The resulting album is an honest, organic rock album that pays homage to his background and influences while retaining a sound that is still totally his own.
5
What's This
Advertisement