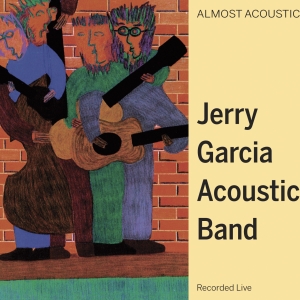 LOS ANGELES – Before the Grateful Dead, the Warlocks, and even Mother McCree’s Uptown Jug Champions, Jerry Garcia played in the Black Mountain Boys, a band he formed in the early 1960s with the exceptionally talented Sandy Rothman and David Nelson. Together only a short time, they played the kind of bluegrass, country, gospel, and old-time music that swept through coffeehouses coast-to-coast in the post-Beat, pre-Beatles era that Garcia called: “the folk scare.”

The trio came together again in 1986 to form the Jerry Garcia Acoustic Band with John Kahn (upright bass), Kenny Kosek (fiddle), and David Kemper (drums). The group’s brief but glorious arc spanned more than two dozen shows in 1987 and 1988, which mostly featured them opening for the Jerry Garcia (electric) Band.

The beloved group is spotlighted with a newly remastered version of 1988’s long out-of-print ALMOST ACOUSTIC, the sextet’s sole release, and the much awaited arrival of its sequel, RAGGED BUT RIGHT. Each will be available November 16 at all physical retail outlets for a suggested list price of $13.98. In an exclusive offer from Dead.net, the albums can be purchased together with a deluxe booklet that includes an essay by Steve Silberman that details Garcia’s lifelong love for traditional string-band music as well as a history of the JGAB for $23.98.

ALMOST ACOUSTIC presents a sprightly selection of performances recorded during shows at the Wiltern Theatre in Los Angeles and The Warfield in San Francisco. The album’s 14 tracks include tunes popularized by the likes of Jimmie Rodgers (“Blue Yodel #9 (Standin’ On The Corner)”), Tex Logan (“Diamond Joe”), and Mississippi John Hurt (“Spike Driver Blues.”) Also featured is “Ripple,” which was written by Garcia and longtime Dead lyricist Robert Hunter.

Encouraged by the album’s warm reception, Rothman produced a successor titled RAGGED BUT RIGHT that has remained unreleased for more than 20 years—until now. Its 15 songs double the JGAB’s official canon with additional selections from the Warfield and Wiltern shows, but the bulk of the performances come from the band’s historic “Thirteen Magical Nights” run on Broadway at Lunt-Fontanne Theatre.

Rothman recently tweaked the selections for RAGGED BUT RIGHT, which includes the band’s soaring harmonies and impeccable playing on Leadbelly’s “Goodnight Irene,” country music legend Charlie Monroe’s “Rosa Lee McFall,” and the country hit “I Ain’t Never” written by Webb Pierce and Mel Tillis. The set also showcases the group’s unique take on traditional songs such as “Two Soldiers,” “Bright Morning Star,” and “Deep Elem Blues,” a song that crept into the Dead’s set lists on occasion. While the title track’s history dates back to the early 1900s, the Jerry Garcia Acoustic Band plays a version popularized by George Jones.