Unsung Hero - A Tribute to the Music of Ron Davies 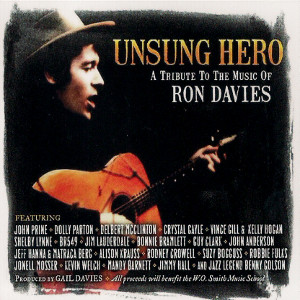 Ron Davies is a name you might not be familiar with, although you’ve probably heard his music many times. He is best known for having written “It Ain’t Easy” for David Bowie and “Long Hard Climb” for Helen Reddy. Ron was also the writer of “Dark Eyed Gal” for the Nitty Gritty Dirt Band, “Good Old Song” for Dobie Gray and “Steal Across The Border” for the Grammy nominated Joan Baez album "Play Me Backwards".

Born Ronny Wayne Dickerson in Shreveport, Louisiana (the oldest son of country singer Tex Dickerson), Ron was naturally influenced by songwriters like Hank Williams, but he also loved the music of Blind lemon Jefferson and classical guitarist Andrés Segovia. Ron spent his early years living in the South, until his parents separated, and he moved to Washington State. His last name was changed when his mother remarried and Ron was adopted by his kind and caring stepfather, Darby Davies, who bought him his first guitar. Ron’s songs often reflect his love of the Pacific Northwest, and yet a longing to get “Back To The South.”

By the time Ron was seventeen, he had written an album’s worth of stellar songs for a Seattle based band called The Wailers, along with a hit single entitled “It’s You Alone.” Ron’s unique singing and writing style (referred to by Joan Baez as a cross between Bob Dylan and John Lennon) caught the attention of A&M executives in Los Angeles. Ron was signed to a recording contract in 1968 and released his first solo album, Silent Song Through The Land, featuring ten of his original compositions, including the blues standard “It Ain’t Easy.”

Ron’s career received a boost in 1970 when Three Dog Night recorded this song and made it the title of their album. Although often miscredited to Ray Davies (Ron displayed his wry sense of humor when he asked his publisher to take The Kinks out of his copyright), “It Ain’t Easy” gained international fame when a British artist by the name of David Bowie recorded it on his album The Rise and Fall of Ziggy Stardust and The Spiders From Mars.

Ron moved to Nashville, Tennessee in 1985 and signed with Cedarwood Publishing and later as a staff writer for Warner/Chappell Music. Although not a professional actor, Ron was cast as the lead character in the George Jones’ video Cold Hard Truth in 1999. He toured Europe with his sister, country singer Gail Davies, in 2002 and also appeared with her at the Kerrville Folk Festival. Inspired by the experience (Ron received a standing ovation at the end of his performance), he recorded a new album entitled Where Does the Time Go. This would be the last album that Ron would release. He died of a heart attack on October 30, 2003, leaving behind an impressive musical legacy of more than 600 songs.

Unsung Hero – A Tribute To The Music of Ron Davies features 22 of Ron’s compositions performed by some to his favorite artists. Produced and arranged by Gail Davies (Gail was nominated for an Americana Award in 2001 for producing Caught In The Webb), this new album is a must for any serious connoisseur of good music and poetry.