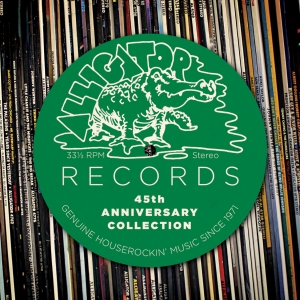 On May 25 and June 2, 1971, the rawest, roughest-edged, most joyful blues band in Chicago recorded their first album. With the help of two fledgling producers, Bruce Iglauer and his friend Wesley Race, they cut multiple takes of twenty-five songs in two evenings, recorded live and mixed as they were being recorded. The album, issued in August of that year, was simply named after the band: Hound Dog Taylor And The HouseRockers, the first release from a brand new label called Alligator Records.

Alligator was a leap of faith, an underfinanced one-man operation run out of an efficiency apartment. It was launched with an album by a band virtually unknown outside the local bars where they played. The album captured the band’s glorious racket and the vibrant, rocking spirit of the South and West Side Chicago blues clubs—simple neighborhood taverns in the city’s black community where mostly Southern-born, working class people bonded together and sloughed off the frustrations of their day-to-day hard lives by listening and dancing to the honest, rhythmic, joyful and cathartic music they had grown up with—the blues. Two of the three members of the band—Hound Dog, a fifty-five-year-old former sharecropper and factory worker, and Brewer Phillips, a part-time construction worker, had come to Chicago from Mississippi looking for decent jobs. The third member, drummer Ted Harvey, a loading dock worker, came from the Windy City. They had no reputation, no booking agent or manager, and they were not creating music that sounded much like anything getting played on any form of commercial radio. Yet their unbridled energy, unfettered joy and raw soulfulness of their music somehow communicated to people all over the world, making them blues legends and making their debut recording a classic that continues to be discovered by legions of new fans.

Forty-five years later, Alligator Records, now with a catalog of almost three hundred albums, continues to be bound by the same philosophy that led to that first recording—that direct, unvarnished, straight-from-the-soul blues and blues-rooted music, the music we call “Genuine Houserockin’ Music,” speaks to some primal, necessary place in people’s consciousness. We believe that our music, if delivered by charismatic, soul-stirring artists, and if publicized, promoted and marketed with unwavering energy, will find a worldwide audience, stand the test of time, and keep the label moving forward for years to come.

The first years of Alligator were dedicated to recording artists from Chicago’s deep well of blues talent. Besides Hound Dog Taylor, the label released albums by Big Walter Horton, the then-unknown Son Seals, Fenton Robinson, Koko Taylor and Lonnie Brooks. In an effort to expose the wealth of Windy City artists, in 1978 and 1980 we released the six-LP (now four-CD) Living Chicago Blues set (and followed it with a single-album collection called The New Bluebloods in 1985 to introduce some of the newly-arisen Chicago talent).

As the blues grew further from its Deep South roots, and the African-American audience turned to other forms of music, the large pool of musicians who had grown up in the blues tradition began to dry up. At the same time, a new generation of musicians, inspired by the blues but not part of the historic flow of blues, began to reshape the traditional elements to speak to contemporary audiences. Artists like JJ Grey, Anders Osborne, Jarekus Singleton, Selwyn Birchwood, and the newest Alligator family members, Toronzo Cannon and Moreland & Arbuckle, are defining blues and roots music for future decades.

The previous Alligator Anniversary Collections have been aimed at showing the complete span of the music we’ve recorded. For this collection, we have chosen to shine the spotlight somewhat more on the current artist roster and on those artists who are showing some of the directions Alligator will be heading in the future.

Over the last five years, since the release of Alligator Records 40th Anniversary Collection, we’ve lost too many members of the extended Alligator family, not only artists on the roster and those who had previously recorded for us, but also those who made memorable guest appearances on our releases. We will always miss Michael “Iron Man” Burks, Otis Clay, Michael Coleman, Popsy Dixon of the Holmes Brothers, Lacy Gibson, Wendell Holmes, Long John Hunter, Smokin’ Joe Kubek, Magic Slim, Sista Monica Parker, Pinetop Perkins, Ann Rabson, Pete Special of Big Twist & The Mellow Fellows and Johnny Winter. We also pay special homage to The King Of The Blues, B.B. King, who graced us with a guest appearance on Alligator. This collection is dedicated to all of them.