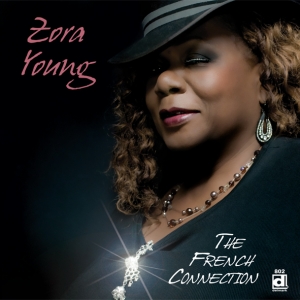 
The love affair between Europe and the blues began in the early 50s with the arrival of Big Bill Broonzy who performed in Limoges, France, where most of the musicians on this album come from and where it was recorded. Zora first performed in Europe in 1981 and has followed with more than 20 tours in France making her the Chicago blueswoman record-holder! Inspired by Zora’s and Bobby Dirninger’s recording of “Two Trains Running” on her previous Delmark album, Tore Up From the Floor Up (Delmark 784), producer Chris Dussuchaud suggested a half-electric / half-acoustic album. The French Connection is Zora’s awesome renditions of not only Chicago blues, but also gospel, jazz, deep Mississippi blues, and country music in her own, very special way.

"In the Ghetto" arrangement based on Chris Dussuchaud’s idea.

Tight Connections
The love affair between Europe and the Blues began in March of 1953, with the arrival of Big Bill Broonzy. Being introduced on this first European tour as the "last bluesman standing", Broonzy performed in Limoges, France (where most of the musicians of this album come from and most of it has been recorded). It was Jean Marie Masse and his local Hot Club de France who booked the show. Today, aged 88 and still active, Masse still remembers the enthusiasm of the audiences, the full venues, and the extraordinary interest of the French in Blues music. "He (Big Bill) played until 5 o’clock in the morning!" Bluesmen received a truly warm and inspirational welcome from the people of Europe, resulting in a true and lasting relationship. Muddy soon followed, then the American Folk Blues Festival; a Lipmann and Rau (German) production that started in 1962 with John Lee Hooker, Sonny Boy Williamson II, Big Joe Williams, Lonnie Johnson, Junior Wells, Buddy Guy, Memphis Slim and many more on the bill. All of them soon became living legends in Europe! A few of them even remained there, settling down permenantly in Paris, (Memphis Slim, Luther Allison) or Munich, Germany (Champion Jack Dupree). With more consideration, better paying gigs and less racial discrimination, Europe is deserving of the appreciation for its important contribution to the recognition of Blues music as an art form. This was the beginning of a prolific cultural crossover between the two continents.
Zora Young first arrived in Europe in late 1981 with the "Ladies Sing The Blues" tour. She recalls how thrilled they were - Bonnie Lee and Big Time Sarah shared the ticket with her. "Coming to Europe was quite something, man! We were so excited!" The girls performed in Limoges on January 18th, 1982 to a full house. Zora followed with more than 20 tours in France up to the present day, which firmly establishes her as the Chicago blueswoman record-holder for most performances there! "People really dig Zora in France", says Bobby Dirninger. "She’s classy with that subtle mix of hip, mischief and self dignity on stage. She’s exactly what the French people expect from a woman singing the Blues". The two met in Switzerland in 1991 when Bobby was hired to replace a local piano player on Zora’s Swiss tour, which was the beginning of their collaboration and friendship. Bobby readily confesses, "Musically speaking I was not familiar with constant improvising, all these musical codes, and another way to behave on stage that had nothing to do with the European way! It was obvious I had a lot more to learn!". Like many other European blues apprentices, he moved to Chicago. That was in 1992, and he soon became a regular visitor at the Jazz Record Mart store, the one Bob Koester used to run on Lincoln Avenue. On her side, Zora made her Delmark debut with the tremendous Learned My Lesson (Delmark 748) album in 2000, before cutting a 2nd one in 2004, entitled Tore Up From The Floor Up (Delmark 784), on which Bobby plays the piano and acoustic guitar on their cover of Muddy’s "Two Trains Running". This was the number that encouraged Bobby’s long time friend and French producer, Chris Dussuchaud, to produce Zora’s new album. Dussuchaud said, "I thought their cover of Muddy’s song was wonderful. I wished the two of them would have cut more acoustic numbers like that together. So, I asked them if they’d be up for a new album that’d be half acoustic, half electric". In the summer 2007, a new Zora Young CD was on its way. To accomplish this, three different backing bands were needed: a live band, (the Paris talent of the Natural Blues Band), a special studio band (the regular musicians of Bobby’s local band), and an all acoustic band featuring washboard player, Catherine Girard, and the upright bass player Dominicho Stocchi. Three bands for three sounds that could provide a foundation for Ms. Young’s awesome renditions of not only Chicago Blues, but also Gospel, Jazz, deep Mississippi Blues and Country music... à sa manière, in her own, very special way.
Recording sessions took place in France between August 2007 and November 2008, resulting in a moving testimony and sure proof of the universality of the Blues today. "Blues aficionados can be found all around the world now, and they all help to keep the Blues alive", Zora explains. The love affair continues, and the connections remain tight.